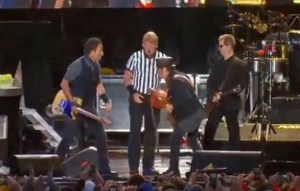 Bruce Springsteen had been covering songs throughout his complete tour in Australia and New Zealand and now it looks like he is bringing that special tradition back home for his Spring tour.

During last night’s headlining performance as part of the NCAA March Madness Music Festival in Dallas, Springsteen kept up the tradition by adding a cover into the mix during his gig. This time, the song was “Jump” by Van Halen because what other song would you pick for a basketball tournament? Maybe “Space Jam,” but we’re not sure how a drums and guitar version of the song would sound.

The video, though it does start out with a crappy, fuzzy image of the performance sharpens up to the E Street Band arriving on the stage. The Boss arrives onto the stage shortly, carrying a basketball which leads to a tip-off between him and guitarist Nils Lofgren. And yes, even a referee was on hand to toss-up the basketball into the air.

Talk about getting into the spirit.

Check out the full video below.

The NCAA March Madness Music Festival marked the first day of the Springsteen and the E Street Band’s North American tour in support of the recently released High Hopes. The tour is slated to travel to several cities in the United States eventually wrapping up on May 18 at the Mohegan Sun in Uncasville, CT.