Kanye West might have been dropping hints about him heading out on tour soon in support of his latest album, Yeezus, and today all the hinting led to an official confirmation. West announced that he will, in fact be heading out on a North American tour starting in mid-October in support of his recently released album. This will be the rapper’s first solo tour in five-year, at least that’s what the tour poster says.

The tour will hit up 23 North American cities and sales for the tickets are scheduled to go on sale next Friday, September 13. Also going along for the ride with the exception of a few dates will be Kendrick Lamar.

Full tour dates and the tour poster can be seen below. 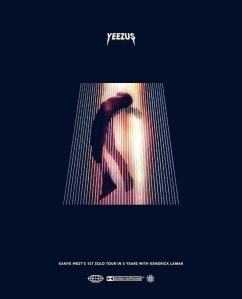