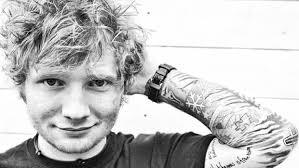 Ed Sheeran already won the hearts of many girls (and maybe some guys) by playing the guitar and singing songs, but now the British musician can add dancing to that list.

In his new music video for “Thinking Out Loud,” the redheaded musician shows that he has the moves on the floor, but not just any moves, ballroom dancing moves. For those not familiar with ballroom dancing, it’s not just the run of the mill dancing; just check out an episode of Dancing with the Stars if you don’t believe us.

Check out the video below as the normally dressed down singer classes it up and hits the dance floor with his partner.

“Thinking Out Loud” is Sheeran’s third single from his recently released album, X. Not too shabby for a song that was released as a “grat” track and was used solely as a promotional single.

With the Nine Days of Ed Sheeran special on MTV, it was only a matter of time before some of the Brit’s new songs from his upcoming new album, would be released.

Thanks to Sheeran and MTV, two new songs from the 24-year-old’s new album have been released. The tracks are titled “Even My Dad Does Sometimes” and “Shirtsleeves.”

An excited Sheeran took to Twitter to reveal some exciting news while on his way to a festival in Germany.

Reportedly, two more tracks are set make their debut this weekend as well. That’s one way to get viewers to gravitate to your channel and try to remind the older generation that the “M” in MTV used to stand for music, not mindless.

Check out the songs here.

A few days after giving us a really weird music video for his lead single, “Sing” featuring Pharrell and Anti-Ed, the puppet, Ed Sheeran has followed it up by releasing another new track from his upcoming new album, X.

The song is titled “Thinking Out Loud” and made its debut in a live performance on a BBC 2 program, The Jools Holland Show. Following the performance the video was released which also doubled as a lyric video.

“Playing a brand new never before heard song on jools tonight in 30 minutes on BBC2. It’s my favourite track on the album x,” Ed admitted to fans on Twitter right before performing the track.

The full performance can been seen below.

“Thinking Out Loud” marks the third song from the forthcoming album to be revealed. “Sing” was the first since it is the lead single, the ex-lover-dissing track “Don’t” made its debut on Saturday Night Live earlier this month and now this one. X is set to be released on June 23, but we can bet some other tracks will be revealed before the full album hits the shelves.

Ed Sheeran might be referred to as a teddy bear by fans and himself alike (just check his Instagram user name), but did you think you’d see the day when the British singer would be turned into a puppet?

That’s exactly what we got with the official music video for his current single, “Sing.” In the video the Ginger singer hangs out with super-producer Pharrell as well the Ed Sheeran puppet which kind of looks more like Rupert Grint than Ed Sheeran.

Considering that one time that girl at a show screamed, “I love you Rupert Grint,” it should come as no surprise. Mix the creepy puppet with some strippers, alcohol and some Koreans singing karaoke and this is what you get. Keep an eye out for Ed and Pharrell’s faces when puppet Ed busts through the video shoot.

His new album X is scheduled to be released on June 23, just in time to add to your Summer playlist.

Ed Sheeran has become many girls’ dream teddy bear, but apparently like his close friend Taylor Swift, if you hurt him, he will call you out in a song.

Rumors began late last week that the British singer would be featuring a song titled “Don’t” on his upcoming new album, X, and that the subject of the song happened to him. The story goes that Sheeran was “dating” fellow British singer, Ellie Goulding last year and during their courtship Goulding cheated on him with One Direction’s Niall Horan.

Though no names have been named, the song is about a real-life fling with another singer that ended when she slept with a close friend of his. You make the connections.

In a recent interview with Billboard, Sheeran does admit that the subject matter was “100 percent true. I could have gotten nastier – there was more s**t that I didn’t put in.”

Though the story has not been confirmed, the lyrics tell us that Sheeran was not messing around with lines like ““I never saw him as a threat, ’til you ­disappeared with him to have sex//If I show courtesy and respect to someone, I expect to receive it.”

Sheeran’s sophomore album is due out on June 23.

Over the weekend, we were given the good news that Ed Sheeran would be releasing his sophomore album sometime with in the upcoming months.

Sheeran, had revealed that several places such as the U.K., Ireland, Germany and Australia have to wait a little longer than the rest of the world for the new album which has been titled X. Every other place aside from those territories will reportedly get the complete new record beginning tonight.

At least one good thing is coming from the waiting, the lead single from the album,the Pharrell produced “SING” made its debut and hopefully can tide some of those Sheerios over until the record hits locals store. But let’s be honest, with the way the internet works and how relentless those fans are, the album has probably already been leaked on one of those sites.

Sheeran also has reminded fans, “once the first play has happened, please badger your local radio station to play the song as much as possible, wherever you are in the world.”

You heard your leader, Sheerios, get to work.

Ed Sheeran hasn’t released any new matter in what probably feels like forever for his loving and crazy fan base the Sheerios, but good news is coming for those who have wanted for what felt like ages, even though it’s only been about two years.

Yesterday, it was announced Sheeran will be releasing his sophomore album X on Monday night everywhere except the UK, Ireland, Germany and Australia. For those Sheerios that don’t live in those territories, Sheeran did promise that the album will be available within a month of the original release date.

Though the song hasn’t leaked online yet, former British boy bander and TV presenter Marvin Humes, revealed in a tweet that he had heard the Pharrell produced track and that it was “VERY good.” Humes also revealed that Sheeran would be passing by his show to answer some questions, just in time for the new song’s release.

So @EdSheeran played me his new single yesterday.. It is VERY good.. Gonna have a chat with him on Monday night on my show @CapitalOfficial

The news of the upcoming new music comes a few days after Sheeran granted a dying fan her final wish to hear him perform “Little Bird” for her. Sadly, after she was given her wish, 15-year-old Triona Priestley passed away after her long battle with cystic fibrosis.