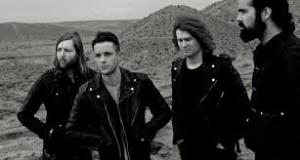 The Killers just finished releasing the music video for their new song, “Shot at the Night” last week, after revealing a lot of new information along the way. The news included two new songs and a greatest hits compilation titled, Direct Hits!,  in celebration of the tenth anniversary of the band.

“Shot at the Night” had been produced by electro-group, M83’s frontman Anthony Gonzalez; the second collaboration that the twosome had done. But for The Killers, having one electro-dude on the album was not enough. When the news surfaced about the compilation, the band released a track list for fans to look over and on it, there was a familiar name remixing one of their hit songs.

Calvin Harris had been tapped to remix the band’s hit song, “When You Were Young” from their second album, Sam’s Town. Harris has recently made a name for himself on top 20 radio stations thanks in part to his song, “I Need Your Love” featuring British singer, Ellie Goulding.

For now, you can listen to the mixed track here.