Bullet for My Valentine, Simple Plan, and Saves the Day are just some of the latest additions to the 2019 Slam Dunk Festival lineup. On Tuesday (Nov. 20) festival organizers took to social media to announce the addition of 11 more acts that will make their way to the United Kingdom for the annual, springtime music festival.

“Being asked to headline Slam Dunk off the back of Gravity is a massive compliment on how diverse our band is, we’re very happy and honored that we get regarded as a headliner for Slam Dunk,” Bullet for My Valentine frontman Matt Tuck told Metal Hammer about the recently announced news.

Mirroring Tuck’s sentiment is Saves the Day frontman Chris Conley: “We are so excited to play Slam Dunk next year! It’s always a blast to come overseas and sing Saves songs with all our fans. See you soon!!”

In addition to Bullet for My Valentine, Simple Plan, and Saves the Day, Glassjaw, Knocked Loose, the Get Up Kids, Turnstiles, Tiny Moving Parts, the Menzingers, I Don’t Know How But They Found Me, and Slam Dunk veterans Trophy Eyes will round out the second wave of performers.

Tickets for Slam Dunk Festival 2019 are currently available on the event’s website here.

Following the horrific Pulse Nightclub shooting, musicians have gathered to help support the victims/families of the shooting and the city of Orlando however they can. Panic! at the Disco held a blood drive and released a limited edition t-shirt with all proceeds being donate. PVRIS and Beartooth did the same by releasing limited edition t-shirts while You Blew It!, who call Orlando home, released an EP benefiting Center Orlando, an LGBT center providing counseling in the wake of the shooting.

On Friday (June 17), it was announced that a slew of artists have joined forces to release a compilation titled Forever Beautiful: A Collection Of Love For Orlando. The record will feature a total of 49 bands with all proceeds from the release going directly to the OneOrlando fund; the fund created to assist those who were victims of the shooting. Bands like  Taking Back Sunday, Real Friends, New Found Glory, Modern Baseball, Allison Weiss, Knuckle Puck, Foxing, Bad Religion, Somos, Anthony Green, You Blew It!, Into It. Over It., Pity Sex, Pinegrove, the Menzingers, Citizen, Thin Lips, Sorority Noise, Tiny Moving Parts, Turnover, Anti Flag, Tigers Jaw, Basement, and more are featured on the massive album.

“This compilation is a love letter to the community of Orlando, FL. Following the tragic events at Pulse Nightclub on June 12th, we wanted to show our support and love for our LGBTQ community the best way we knew how; through music,” begins a collective statement from all the contributing artists.

“The tracks on this album were all individually contributed by the bands and artists themselves; artists from Orlando, New York, California, England, and all over the globe. All proceeds from this compilation will be donated to support the victims of the Pulse shooting as part of the OneOrlando Fund as a symbol of solidarity as our city rebuilds. The price of this album is whatever amount you would like to donate to this cause.”

What is a band to do after they’ve played supporting act to two big bands in one year?

Go on their own headlining tour, of course.

State Champs announced earlier in the day that once their Australian tour with 5 Seconds of Summer has wrapped, they will be returning to North America for their own headlining trek.

Heading out on the road with them will be Hit The Lights, Tiny Moving Parts, Let It Happen, and Northbound.

The trip which has been named “The (S)Hot Boys of Summer Tour” will begin on July 16 in Worcester, PA at the Palladium Upstairs and wrap up on Aug. 2 in Chicago at the Bottom Lounge.

Check out the full list of tour dates, as well as the official poster for it, below. 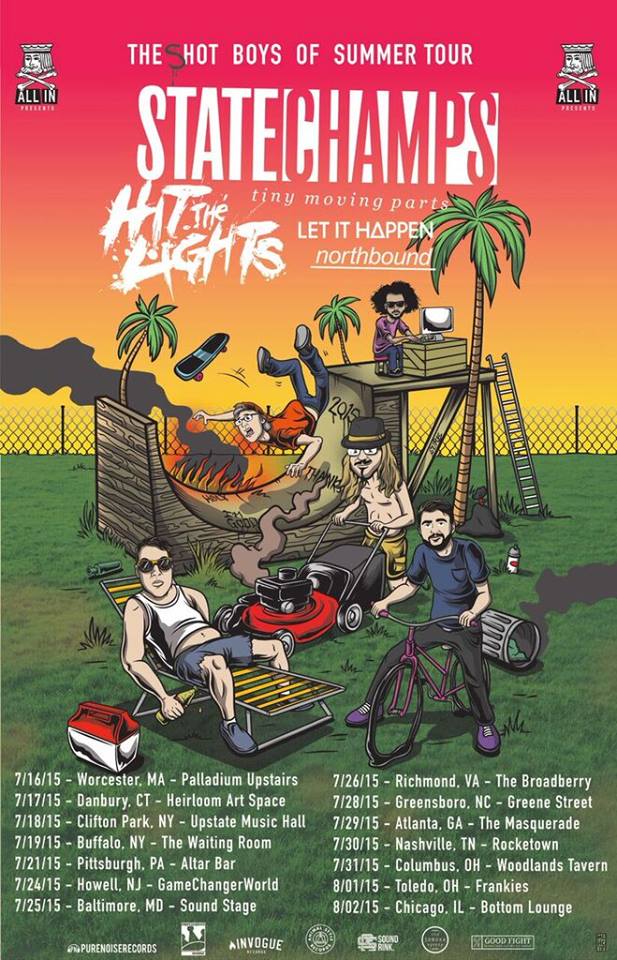 The Summer tour dates come on the heels of the band revealing they will be releasing a new album later this year though no official date or title has been given for it yet.