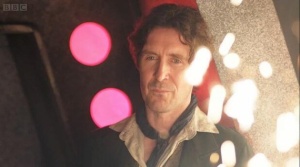 With only a Christopher Eccleston (9) amount of days left until the highly-anticipated Doctor Who 50th anniversary special, the BBC have gifted fans with a prequel that features the Eighth Doctor, and birthday boy, Paul McGann.

After repeatedly confirming that he was not going to be involved in the 50th anniversary special, it comes as a big surprise to Whovians to see the Eighth Doctor in action in the webisode. The prequel titled, “The Night of the Doctor” finds out hero in the midst of the famous Time War that we had heard so much about.

The Doctor lands his TARDIS in a ship where we find out of the last remaining person on board, that the war is currently ongoing. The short also show us just how the Doctor spent his last couple of hours before being forced to regenerated into, you would never guess, THE WAR DOCTOR!

That’s right, if you blink at the credits you might miss that John Hurt’s character has official been named the War Doctor. Anyways, watch the prequel below and get ready for the 50th.