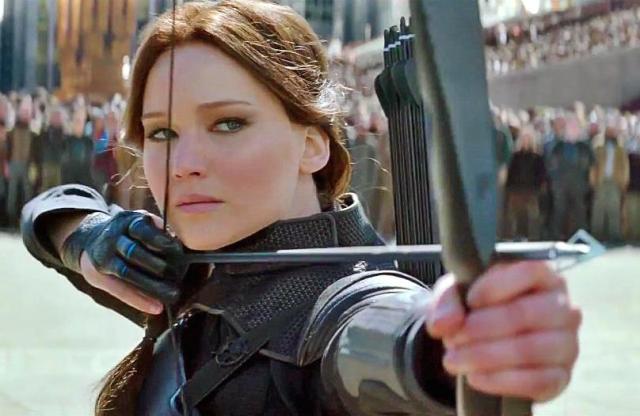 After years of waiting for the epic showdown between Katniss Everdeen and President Snow, the final film adaptation of the Suzanne Collins book series is here.

“Snow must pay for what he’s done!” proclaims Katniss to everyone who is a part of the revolution against President Snow and all his lackies in the Capitol.

The trailer starts off with something that should be a momentous and happy event, Finnick and Annie’s wedding, but for those who have read the book series, they know that the happiness does not last long, because if snow is around, there is no happiness.

If the scene of Finnick and Annie getting married didn’t tug at your heartstrings, then the scene with Katniss and Prim dancing, having a good time should have done it for you. Or at least for the people who have read thee book series and know what will be happening in the intimidate future for our revolutionaries.

Watch the first trailer (of probably many) for The Hunger Games: Mockingjay Part 2. Much like its predecessors, the film will come out in November around Thanksgiving; Nov. 20 to be specific. 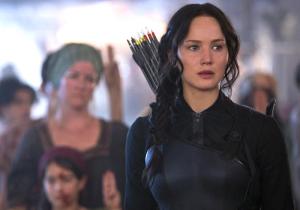 That is one powerful statement to come out of Katniss Everdeen in the final trailer for Mockingjay– Part I, but it’s a promise that she made and she kept against arch-enemy President Snow.

The Hunger Games: Mockingjay–Part I will hit theaters in a little under a month and fans have received the final trailer which find Panem on fire, literally, as Katniss takes her place as the Mockingjay in the third installation of the film and book franchise.

The armies are at war and we see Peeta warn Katniss about the Capitol or shall we say, Snow’s plans to take down the rebellion and how she will be “dead by morning.” Not exactly a great thing to tell your kind of girlfriend after being kidnapped and brainwashed.

In a little over a minute we see the world author Suzanne Collins created on paper and on the big screen burn down.

The Hunger Games: Mockingjay–Part I will be released on Nov. 21. Pre-sale tickets for the film have already gone on sale. Of course, fans will have to wait a complete year for the second part of Mockingjay which will be released in November of 2015. 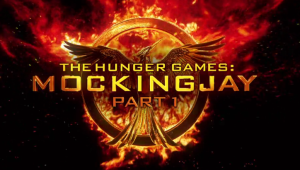 The Hunger Games: Mockingjay–Part I is so close to being released in theaters and we have yet to hear any of the songs on the upcoming film’s soundtrack.

A few months back, it was revealed New Zealand singer, Lorde would be taking over the job as “curator” of the soundtrack. Up until now, we’ve only head one song from the film’s soundtrack, Lorde’s “Yellow Flicker Beat” which was present in the latest trailer for the film.

Today, those wonder when we will get another track from the record were given an electronic track titled “This is Not a Game.”

But if you think this is just another run-of-the-mill soundtrack song or another Lorde song that could find its home on her album Pure Heroine then you would be wrong.

“This is Not a Game” which premiered on Zane Lowe’s BBC Radio show (as always) is a Chemical Brothers’ song which feature Lorde and Miguel on vocals.

Yes, quite a mix, but don’t expect Lorde to be a prominent fixture on the track because she really only there to say three words, “there it is.”

“This is Not a Game” is now the second song confirmed for the soundtrack which raises the question, “when are we getting the rest of the list of artists?”

Soon, we hope since The Hunger Games: Mockingjay–Part I comes out on Nov. 21 while the soundtrack will reportedly be released on Nov. 17. 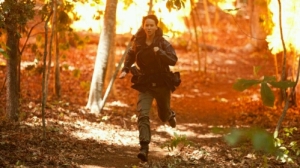 There’s no place like home for Katniss Everdeen and after having to be in both The Hunger Games and the Quarter Quell, it’s only logical that she wants to go home, but President Snow has made that impossible.

Like we witnessed, or at least were told at the end of The Hunger Games: Catching Fire by Gale Hawthorne, “there is no District 12.”

In the new preview for the upcoming installation of the hit book and film franchise, we are shown what exactly it means to become the Mockingjay when Katniss is taken back home to see the ruins that were once District 12.

If that wasn’t enough of a declaration of war by Snow, then we’re not sure what is, especially with the presence of that vase of dead, white roses with only one rose bud surviving. What’s Snow trying to say with that, huh?

Check out the new preview below which features Lorde’s newest track, “Yellow Flicker Beat” exclusively written for the soundtrack.

The Hunger Games: Mockingjay Part I will be released on Nov. 21 while tickets will go on sale beginning Oct. 29. 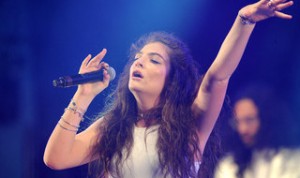 When Lorde revealed that she had been chosen to curate the upcoming Hunger Games soundtrack at the end of July, the response was pretty good.

“Yellow Flicker Beat,” her song contribution to the soundtrack, will be played during the end credits of The Hunger Games: Mockingjay–Part 1.

Listen to the new song below.

As of now, no other artists have been revealed for the soundtrack, but considering they have managed to get artists such as The National, Imagine Dragons, Coldplay, The Arcade Fire, Patti Smith, Ellie Goulding, Christina Aguilera, Maroon 5 for the previous albums, this one should be no different.

The Hunger Games: Mockingjay–Part 1 will hit theaters on Nov. 21. 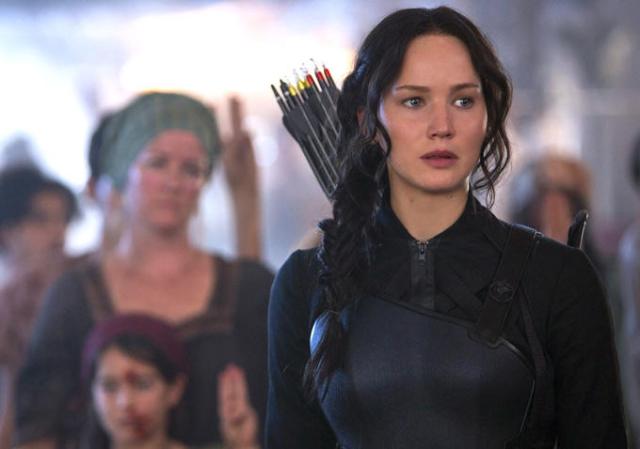 After months of promotional posters and talks about the upcoming installation of the Hunger Games franchise, we have finally received the first, official trailer of The Hunger Games: Mockingjay–Part 1 which introduces the audience to how things went from normal to complete chaos since the Quarter Quell.

Instead of going into full details about the trailer, watch it here and try not to feel chills down your arms as you watch the “world burn.”

The last few months has seen images and videos uploaded in support of the new film. Videos featuring President Snow with Johanna and Peeta and then the one featuring Beetee hacking into the Capitol’s stream informing the people of Panem that “the Mockingjay Live.” 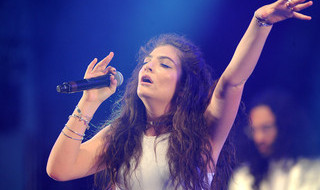 Every book series that has been turned into a film franchise has had the good fortune of getting fantastic artists to contribute music to the soundtrack.

It was announced today that The Hunger Games–Mockingjay Part 1 has gotten one of the hottest artist of the last year to curate the soundtrack for the film; Lorde.

The New Zealand songstress announced that she would not only be working on the music for the third installation of the Jennifer Lawrence staring film, but she will also contribute an original song to the record which will also be the lead single.

“Curating the soundtrack for such a hotly-anticipated film was a challenge, but I jumped at the chance,” said Lorde in a press release.

The soundtracks for the first two installations of the franchise (The Hunger Games and The Hunger Games: Catching Fire) have garnered contributions from artists such as The National, Imagine Dragons, Coldplay, The Arcade Fire, Patti Smith, Ellie Goulding, Christina Aguilera, Maroon 5 and many more.

As if curating a record to one of the most anticipated films wasn’t enough pressure, the singer revealed earlier that she is currently working on a new album that will be different from her breakthrough record, Pure Heroine.

She revealed that the new sounds can be contributed to how she has grown as an artist and writer. 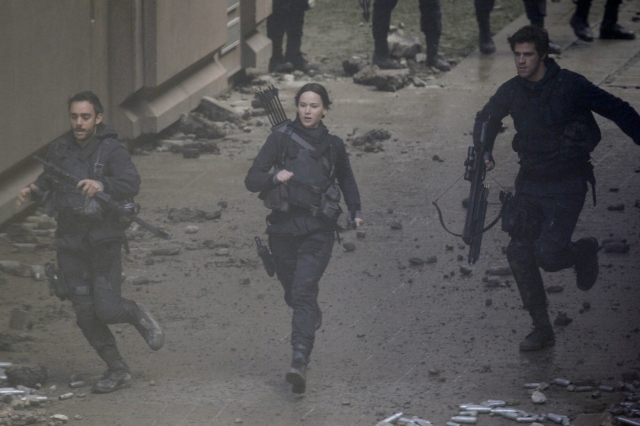 We already know the “Mockingjay Lives” and that Peeta and Johanna have been brainwashed by the Capitol, but now, we officially have gotten the first look at The Hunger Games–Mockingjay Part 1.

The film, which will be released this upcoming November, continues the story from Catching Fire after Peeta (Josh Hutcherson) and Johanna (Jena Malone) get taken from the arena after the Quarter Quell and turned into Capitol Zombies.

Unlike the previous Capitol updates we have seen which have been bright and shiny, the first official trailer is dark and picks up right where Catching Fire left off. We are introduced to President Coin (Julianne Moore) as she speaks to Plutarch Heavensbee (the late Philip Seymour Hoffman) about Katniss and her role in taking down the Capitol. Coin is insistent that the games “destroyed her” while Heavensbee is positive that she can do her job.

Towards the end of the clip we (finally) see Katniss with a group of teenagers in which they ask her if she will be fighting alongside them. To that question, her answer is “I am. I will.”

Long live the Mockingjay. Watch the trailer below. 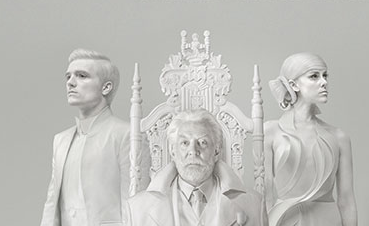 The Hunger Games: Mockingjay–Part 2 has officially wrapped filming, much to the sadness of fans of the book/film franchise, but that doesn’t mean that sadness is everywhere.

Last week, we received the first trailer for Mockingjay–Part 1 which finds President Snow in a white room, on a white throne, wearing white, speaking to the people of Panem about “being one” and “unity” after what happen during the last film.

Standing next to him is Peeta, looking like the brainwashed (and scary) drone he is slated to become in the upcoming film.

As Snow begins his announcement, we see the transmission go weak and eventually be replaced by Beetee, live from District 13, telling the nation that “The Mockingjay Lives.”

We got chills from the sheer creepiness and excitement.

Check out the new trailer as well as the first below.

The Hunger Games: Mockingjay–Part 1 hits theaters on November 21, just in time for Thanksgiving 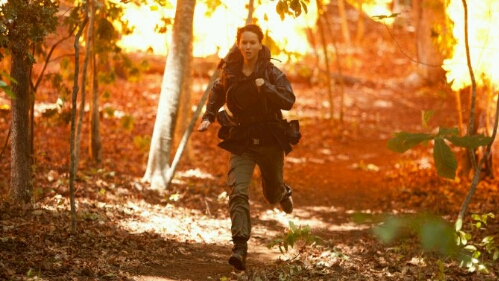 The Hunger Games have become one of the hottest franchises launching their young stars (Jennifer Lawrence, Josh Hutcherson, Liam Hemsworth, just to name a few) into the A-list genre of Hollywood as well as hordes of fans, globally. With a franchise being as popular, rumors already began to circulate that there would be a theme park alla Harry Potter in the works. To think, those plans all circulated around the success of the first film.

Today, Lionsgate revealed their plans to launch “The Hunger Games: The Exhibition” U.S. tour set to hit the road in 2015 while talks for that theme park are still in works. The exhibition will include displays of costumes, props, and other elements of the films. The production company has brought in Thinkwell Group to help with the launch.

According to Lionsgate, the exhibition will be placed in “major museums and institutions.”

“Now that we’ve built a critical mass of intellectual property, we’re committed to extending our brands into exciting new businesses that create opportunities for our fans to engage with our properties at the same time they deliver significant incremental financial benefits to Lionsgate,” said Lionsgate chief marketing officer Tim Palen.

The exhibition will be launched several months before the Nov. 25, 2015 release of the fourth and final film, The Hunger Games: Mockingjay–Part 2. As of now, the first two films have grossed over $1.5 billion at the box office, worldwide.