What happens when you combine one of 2013’s hottest star and some of the naughtiest lyrics? Well, what you get is a hysterical video.

While making his rounds on the late night show circuit, Benedict Cumberbatch delivered a dramatic reading of R. Kelly’s “Black Panties.” Of course with the mixture of the lyrics and Cumberbatch’s deep voice (and lets not forget all the audience members laughing their butts off in the background) it just makes it hilarious.

Check out the video of the actor turning R. Kelly’s words into something that could be somewhat Shakespearean.

You can also see the complete interview here too.

Cumberbatch was on Jimmy Kimmel in support of The Hobbit: The Desolation of Smaug where he plays the elusive dragon, Smaug as well as his hit BBC show, Sherlock.

With every good action movie, there is usually an equally amazing soundtrack and it looks like the soundtrack for The Hobbit: The Desolation of Smaug will follow that logic. The soundtrack for the second part of the Lord of the Rings prequel has been released well before its scheduled date for fans of the series to hear.

Last week, Ed Sheeran’s contribution to the soundtrack, “I See Fire” was released once the new trailer was unveiled.  “It was such an honor working with Peter Jackson on this song. Not only is he one of my favorite directors of my favorite films, The Hobbit was the first book I ever read as a child, so it means a lot that I get to produce music for the motion picture,” the British singer said in a press release. I was allowed complete freedom to create what I thought was fitting for the film, which is very rare, and Peter, Fran and Philippa were always on hand to give notes and pointers.”

Now Entertainment Weekly has gotten their hands on the soundtrack which features the work of Howard Shore. In the liner notes, director Peter Jackson shows just how important Shore’s work is to the film going as far as writing, “Howard Shore – what can I say? His music soars and enriches way beyond its connection to our images. He truly has created an epic musical world of his own. A unique sound like no other. A year from now, we will be able to listen to well over 20 hours of musical story telling, that starts with An Unexpected Journey, and concludes with The Return of the King.  That is Howard’s genius – he is carefully shaping this 6 part epic score as a fully unified narrative. This is the second chapter.”

While the soundtrack isn’t scheduled to be released until December 10, you can head on over to Entertainment Weekly’s website here and listen to 30 second clips of all 29 songs feature on the album. As for The Hobbit: The Desolation of Smaug, the film hits theaters on December 13. 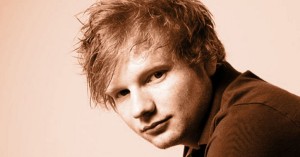 The song, which is named “I See Fire” will be featured on the soundtrack of the upcoming Hobbit film, The Hobbit: The Desolation of Smaug. The new track will not be featured during the actual film, but it will play during the end credits.

“Okay, my new song for the Hobbit movie is up on iTunes everywhere now, finally. Il get the link for ya,” the 22-year-old singer tweeted earlier. He also revealed on Twitter, that he in fact played all the instruments on the song with the exception of the tricky cello.

This past weekend, the singer made headlines again when he performed at not one, not two, but three sold out shows at New York’s Madison Square Gardens where he received a little of a surprise from one of his closest friends and fellow tourmate, Taylor Swift, when the pop star stopped by to perform with him.

As for The Hobbit: The Desolation of Smaug, a new trailer premiered yesterday into the hands of many eager Lord of the Rings fans. The film is not set to be released until December 13 with the soundtrack coming out a few days before on December 10.

Listen to the new track below which by the way can now be in the running for “Best Original Song” for the Academy Awards.

Have you seen the newest trailer for The Hobbit: The Desolation of Smaug?

Even if you have, you can check out the newest trailer that was released on an unsuspecting (or suspecting) internet public earlier today. The new three-minute trailer features the voice of Benedict Cumberbatch, you know the dragon Smaug, but so far, no images of the actual dragon.

Anyways, check out the full trailer below.

The Hobbit: The Desolation of Smaug is set to hit theaters on December 13.

Lord of the Rings fans, look out because the newest trailer for The Hobbit: The Desolation of Smaug has hit the web and it’s a good one.

In the new trailer for the second installment of Peter Jackson’s prequel trilogy, we find ourselves in the midst of Bilbo Baggins (Martin Freeman) finding the infamous ring in the cave belonging to who (or what) else, the dragon Smaug. Baggins almost spills the beans about his recently found ‘precious’ item to Sir Ian McKellan’s Gandalf, but decides not to reveal what he found in the cave and instead opts to tell Gandalf that he found his carriage in the cave.

Even though the titled of the film would make you think that the trailer would concentrate more on the elusive dragon, Smaug, the trailer only has the fire-breather present for a few second at the end.

Also appearing in the trailer are the dwarves of Erebor’s as they try to regain their homeland while some pretty awesome sword fighting and archery from Orlando Bloom’s Legolas and Evangeline Lilly’s Tauriel also makes it into the trailer.

Instead of reading on, just press the play button below and enjoy.

Like you could forget, The Hobbit: The Desolation of Smaug hits theaters on December 13. 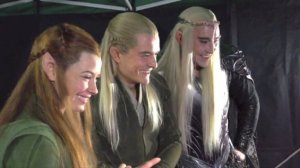 Yesterday, we posted up the trailer for the highly anticipated follow-up to last year’s The Hobbit: An Unexpected Journey. Today, we have had the pleasure of showing you a reaction video featuring some of the cast responding to the reactions that some fans had during the first viewing of the new film’s trailer.

The original clip features two girls viewing the two minute clip for The Hobbit: The Desolation of Smaug which hit the internet yesterday afternoon. One of the two girls says, “I’m breaking into a sweat” before clicking the ‘play’ button on her internet browser leading her into the world Peter Jackson has created.

Upon finding the video of the duo getting beyond excited for the clip, Jackson posted it on his Facebook with the caption, “This is pretty cute.”

But just when you though the “cuteness” stopped there, Jackson posted a sequel to the girls’ video which feature three of the film’s stars, Orlando Bloom, Evangeline Lilly and Lee Pace, dressed in their characters’ attire from the set of the third film, reacting to the fans’ reactions.

“That is an elfin stare if ever I’ve seen one,” says Bloom, while Lilly observes the original clip, “This might be more intense than the trailer.”

The video of the casts’ reaction and the original video can be seen below: