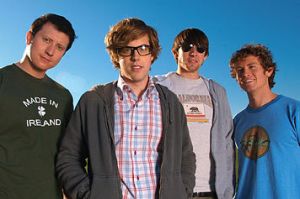 For those that have been suffering from a Something Corporate withdrawal since their reunion tour back in 2010, be in pain no longer, because news has surface that the band’s hit 2003 full-length album, North might be coming to store near you in vinyl form.

Enjoy the Rite Records teased the news over Instagram earlier today by writing, “as promised….it’s coming #north #10thanniversary.” But that wasn’t all the hints that were being given to hardcore and casual fans of the album which turns ten later this year. Label head, Ross Shotland hinted that there might be an October release date (the official ten-year anniversary) and that only 3,000 pressing will be available for purchase.

Shotland also revealed that there will only by three retailers that will be selling the vinyls: ETR, the band themselves and Hot Topic.  Modern Vinyls reports that the record “will be a single LP, housed in a gatefold jacket.”

While this might end up being 100% true, there is always that slight chance that information might change along the way, so for now, take this piece of information with a grain of salt and hope that everything goes as planned.

For those that might have not known, ETR also released the vinyl edition of the band’s other album, Leaving Through The Window, which no surprise is available at Hot Topic.