Just when you thought the guys from the Foo Fighters never slept, drummer Taylor Hawkins went on to reveal that he has another new project called The Birds of Satan. The band which also includes Wiley Hodgen and Mick Murphy who are Hawkins’ band mates from his other group, Chevy Metal, will officially release their self-titled, debut album on April 15.

In honor of the new album, they released a trailer for the album which also happens to feature their first single from the upcoming record titled, “Thanks for the Line.” For those feeling the new group, The Birds of Satan can be pre-ordered on iTunes and will also include and immediate download of the song which can be heard below in the trailer for the album.

Also making an appearance on the record will be Hawkins’ Foo Fighters band mates, Dave Grohl and Pat Smear, but on what tracks, that remains to be seen.

As for the Foo Fighters, we’re still waiting for that new album that they said was almost done and ready to be released last we checked.

After many rumors and lots of coy comments from band members, The Foo Fighters have finally confirmed that the band are in fact recording a new album.

Since last year, Dave Grohl and Taylor Hawkins had been dropping little hints in interviews that they had been working on new material. In an interview, Hawkins had said that Grohl was in the process of writing some new material while he was out on tour with his side project.

Late last night, the band posted a picture of the master tapes on shelf with labels that read, “Foo Fighters ‘LP 8.'” The caption that accompanied the picture was probably the icing on every Foo Fighter fans’ cake which simply read, “It’s Fucking ON!”

How else would one of the biggest rock bands of now announce their upcoming new album?

We can all rest assure that the new album will be coming out sometime in 2014, but there’s a slight chance that it might be sooner than most of us think. The band have been hinting at it for almost a year and even Grohl has said before that they had been working on it in secret.

After going into hiatus in 2012, the Foo Fighters have been dormant, but now the band have announced that they will be performing their first shows, together, since that announcement.

Rolling Stone is reporting that the band will be performing in Mexico City next month which will mark their first shows back into the limelight. The band are scheduled to play two dates, December 11 and December 13, at the city’s Foro Sol venue, with The National opening for them those two days.

Hopes are high that during those two shows, the band will perform some new material that has been rumored to be in works. A few months back, bassist Taylor Hawkins said in an interview that it would not be a surprise if the band puts out some new material early next year since frontman and the guy that never sleeps, Dave Grohl, has been hard at work.

In that same interview, Hawkins said that the band is nowhere near calling it quits since they have no written their defining song. He name checks “Hotel California” and “Bohemian Rhapsody” as songs that defined the musicians behind it as well as withstand the test of time.

“You always want every one of them to be the best one you’ve ever done, and you always think you haven’t done your best one” Hawkins told Billboard a few months back.

He also made his directorial debut with “Sound City,” a documentary about the shuttered Los Angeles recording studio of the same name.

As for Hawkins, he has been performing with his other band, Chevy Metal, during the break and even got a big role in the upcoming semi-autobiography of famed New York club, CBGB; Hawkins played the role of Iggy Pop. 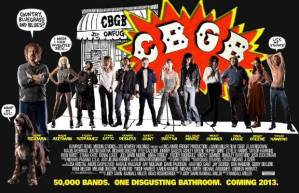 With all the hype the upcoming film, CBGB and news that it has been garnering over the past few months, it was only a matter of time before the first trailer for it would find its way onto the internet.

The upcoming biopic tells the story of the famous New York City nightclub that helped launch some of punk’s biggest artists during the 70s. In the two-minute clip, which can be seen below, we see Alan Rickman as founder Hilly Kristal, Foo Fighters drummer Taylor Hawkins as Iggy Pop, and Watchmen’s Malin Akerman as Blondie’s Debby Harry.

Last week, the full soundtrack track list was revealed and it was quite a list including those that made the nightclub a house hold name. But even though the club was a NYC staple, it still didn’t help it stay a float; the venue was shut down, sadly, back in 2006.

Dave Grohl has to be one of the hardest working men in music because that guy just doesn’t sleep. Easier this year, he was performing at South By southwest with his side band, Sound city Players and now word is getting out that there’s a new Foo Fighters’ album in the works.

But before you think this is all talk, this all comes courtesy of Foo Fighters drummer himself Taylor Hawkins. Hawkins is another musician that just doesn’t sleep. When he’s not playing Iggy Pop on the upcoming CBGB film due out later this year, he’s playing with his metal band, Chevy Metal.

“We’re getting started, we’re getting our ideas together. Dave has his brain working overtime, like usual, and he’s got a lot of great ideas, both musically and conceptually — none that I can speak of at this moment, but it’s gonna be great. It’s gonna be cool” Hawkins said to Billboard.

While at South by Southwest Grohl had told the music publication that he had some crazy ideas for a new Foo album, but nothing was definite. Now, Hawkins is backing up Grohl’s talk about a new album, but also points out that it might be a little bit of a task since the last two albums were a hit.

“Absolutely. You always want every one of them to be the best one you’ve ever done, and you always think you haven’t done your best one,” Hawkins acknowledges. “Although some people may feel we have, I still think we haven’t written our ‘Hotel California’ or our ‘Bohemian Rhapsody’ or whatever. You should always be a little scared…Every time you start a record, you have to be, like, ready to fuckin’ kill yourself or it’s not gonna be any good.”

No matter what, we can probably bet that the new album will be great, nonetheless.