After eight years of waiting and an extra two weeks due to some unforeseen circumstances, Modest Mouse’s highly anticipated new album, Strangers to Ourselves is out and ready for fans to listen to, in full.

Check out the complete stream of the album below, directly from Spotify.

Before the release of the 15-track record, the band had release several songs including lead single “Lampshades on Fire,” “Coyotes,” “The Best Room,” “The Ground Walks, With Time in a Box,” and closing track, “Of Course We Know.”

During a recent interview with hmv, frontman Isaac Brock revealed that the band already had another album in the works; a companion record to Strangers to Ourselves.

“I’m pretty far along with the next one as it is. I went in to making this one with two records in mind,” Brock explained. “It’ll be released as quickly as it’s legally allowed to be. It’s a partner to [Strangers to Ourselves].”

But that interview isn’t even the first time Brock has made reference to another record from the Washington state band.

When talking to Relix about the impending record, he said that the “next record will come out sooner” and that “we have a bunch of songs and we’ll probably rework them. They are good—they’re just not finished. We might put out something really strange next.”

Reassurance for those who had to wait so long for the follow-up to 2007’s We Were Dead Before the Ship Even Sank.

Modest Mouse’s new album is so close to being released that fans who have waited eight years for the new material can almost taste it.

Considering the new album was supposed to be released today (it was pushed back until the 17th for some unknown reason), the band decided to treat their fans with a brand new song from Strangers to Ourselves.

The newly released track is titled “Of Course We Know” which happens to be the closing track on the record.

Check out the song below which joins previously released track, “Lampshades on Fire,” “Coyotes,” “The Best Room,” and “The Ground Walks, With Time in a Box.”

New music isn’t the only good news Modest Mouse has revealed. The band will be heading out on tour beginning on Saturday (March 7) making an appearance at Tampa’s Gasparilla Music Festival. The tour appears to be a combination of some solo tour dates as well as a slew of upcoming festival both in the United States and in Europe.

The current itinerary can be found below.

If you are one of the many Modest Mouse fans that were bummed when the band announced they would be pushing back the release of their new album by two weeks, then don’t be because they have just released another new song from Strangers to Ourselves.

In today’s edition of “new tracks,” the group have released a new song titled “The Ground Walks, With Time in a Box” which can be heard below. Spoiler, it doesn’t sound anything like the other tracks that have previously been released and we kind of want to blast this song in our car.

“The Ground Walks, With Time in a Box” is the fourth track that has been released from the Washington state band’s sixth studio album. “Lampshades on Fire,” “Coyotes,” and “The Best Room” join the new song on the record due out on March 17 instead of its original release date of March 3.

If you haven’t seen it yet, you can check out the full track list for the new album below and keep in mind they will be performing on the Tonight Show Starring Jimmy Fallon on March 17. 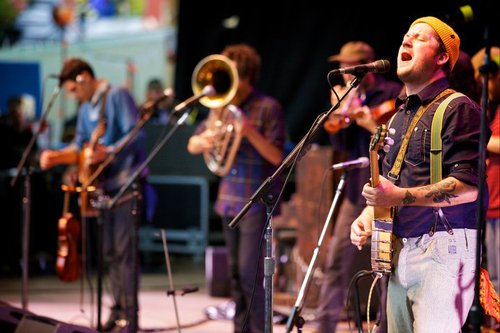