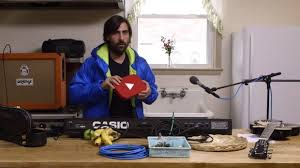 It was only a matter of time before the place were all videos and people go to become internet sensations would their own awards.

YouTube announced earlier today, that they have gone ahead and made up their own award show because when you give the world some artists that would have never made it (hello Justin Bieber and Psy) on their own, you know that you have some super powers.

The YouTube Music Awards might not be threatening any of the several dozen music awards shows we love to obsess over, but they are definitely bringing out the big guns in the form of the guests that will be making their appearances on the show. As of now, Lady Gaga, Eminem and the Arcade Fire have been confirmed to attend while many others will be making taped appearance from different locations around the world. This stunt is an effort from the YouTube masterminds to show how far the website’s reach goes.

The show will be giving out seven awards, total, and the list of nominees will be announced on October 17. Nominees will consist of artists who over the course of the last year have garnered the most views, share and any other type of online love from fans and haters alike.

The show will be 90-minutes long and will be broadcast through YouTube straight from Pier 39 in New York. The host for the show will be former Phantom Planet drummer and actor, Jason Schwartzman while Where the Wild Things Are director, Spike Jonze will be taking over as creative director of the show.

Tickets will be available later on this month, but as to how you can get one, it is still unknown as well as that YouTube Music Award will look like.

For now, check out the commercial for the awards below.