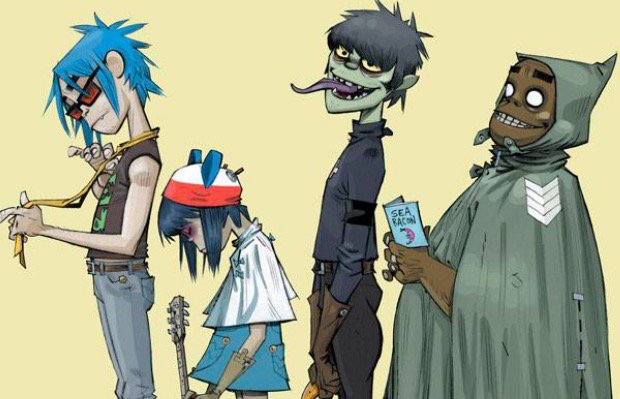 Last month, Gorillaz co-creator Jamie Hewlett had told a fan site in passing conversation that he and co-creator Damon Albarn were shooting for a 2017 release date for the animated group’s new album. A month after a Hewlett’s confirmation, Albarn has now confirmed that a new album is headed our way “really, fairly soon.” During an interview with BBC Radio 6 Music (via AllEyesOnGorillaz), Albarn was discussing everything that he was currently working on.

Back in June, another Gorillaz’s fan site got the inside scoop on the band’s impending new album. “We got Jamie news! This here is HIM and our friend, Linda. Jamie says new Gorillaz is special, really f****n special. Can’t be rushed. 2017, yo,” the caption on GorillazNorthAmerica’s Instagram post read. Before that, the rumors of a new album were already starting to spread. In January of 2015, Hewlett had also confirmed that he and Albarn had reunited to begin working on a new album for the Gorillaz. Then, in the fall of 2015, the duo confirmed that they were working on some new Gorillaz tunes.

The Gorillaz’s last release was 2011’s The Fall.

It’s been months since we’ve heard anything from the Sum 41 camp. Last time the Canadian band updated fans, they already had “six or seven songs recorded.” Now, the group has given fans a little snippet of what to expect from their impending record. On Friday (Dec. 25), Sum 41 took to their Instagram page to post two short snippets of new songs.

In the captions for the two snippets, the group confirm that these are just work in progress (one caption reads “Just a rough mix” while the other one reads “Unfinished”) it’s nice to see how much work they have been doing since their last update. Listen to the two snippets below.

Earlier this year, Sum 41 revealed that they would be hitting the studio to record a new album; the much-anticipated follow-up to 2011’s Screaming Bloody Murder. The new album announcement came over a year after frontman Deryck Whibley was admitted to the hospital for kidney and liver failure. This time last year, the singer had posted images on Facebook showcasing him in the studio which only began talks of a new Sum 41 album.

Then, this past July, the news was confirmed when they posted a link to a Pledge Music page. On the page came the announcement Sum 41 fans had been waiting for; there was new music on the horizon. If that wasn’t enough, there was a reunion on the stage at the Alternative Press Music Awards and a month later it was revealed that former guitarist Dave “Brownsound” Baksh had returned to the band. As of now, there is no projected released date or title for the new album. If you’re interested in still donating to the new album fund, then head on over to Pledge Music and help out. You can also check out some updates from the band as they work their magic in the studio.

Pretty Little Liars returns to a television screen near you next week and in a teaser clip from an upcoming episode, Aria (Lucy Hale) heads to Caleb’s (Tyler Blackburn) new lair with the pretense of being a nice friend and bringing him some coffee.

Of course, Caleb sees right through the act almost immediately when she starts asking about how to hack and asks Aria why she’s really there.

Turns out, she didn’t get into any of the six colleges she applied for, though she does admit that getting into Brown was a long shot.

Being a good friend, Caleb decides to help out, but not in the way that we think Aria expected him to.

Funny. Somehow we assumed that Spencer would be the one hacking into college admission systems.

Check out the clip below.

Pretty Little Liars returns to its normal time of 8 p.m. next Tuesday, Jan. 6, on ABC Family.

The Veronica Mars Movie will be hitting theaters this coming Friday and the people behind the film have given fans yet another treat by revealing the first eight minutes of the highly anticipated film.

Fans of the cult hit, were given the first two minutes of the film last week, which was just a general overview of the three seasons that the show was on the air. During their time stint at South By Southwest today, the new preview was released, much to the excitement of the Marshmallows.

The preview is currently being streamed over at Fandango which you can hit up right here and finds us in the midst of Veronica’s new life trying to get a job at a firm with Jamie Lee Curtis as the big boss. We also find out that Veronica did end up going to her dream school, Stanford after giving away all her tuition funds to her mom’s rehab which we all know was wasted.

And how proud are we of her spunk still being present when one of the partners tries to be “coy” in asking about that “sex video” featuring her and Piz in season three? Oh Marshmallows, our little girl has grown up.

Oh, and pay attention to Piz on the radio when he makes reference to being “passé” and starting again with a “Kickstarter campaign.”

While making his rounds on the late night show press tour, President Snow himself, Donald Sutherland appeared on The Late Late Show with Craig Ferguson. Before taking the stage with the late night host, he brought a long with him a new clip from the upcoming series.

The clip was the scene in the book where President Snow tells our heroine, Katniss Everdeen, that she needs to not convince the people of  Panem that she is madly “in love” with fellow District 12 tribute, Peeta Mellark, but rather she needs to convince him. For anyone who has read the books, it’s probably one of the most important scenes of the series (at least in our opinion) and it’s nice to see that it had not been cut out like another important scene from the series.

Check out the snippet from the film as well as Sutherland’s interview from last night.

Tick Tock, the clock is ticking; The Hunger Games: Catching Fire comes out next Friday, November, 22.