It’s starting to look a lot like music festival season!

On Wednesday (Nov. 20), Atlanta’s Shaky Knees Festival unveiled its lineup for the 2020 incarnation of the annual event.

Headlining the three-day gig will be The Black Keys, The Smashing Pumpkins, and The Strokes.

Joining the already-stacked lineup will be the Yeah Yeah Yeahs, Portugal. The Man, Joan Jett and the Blackhearts, Of Monster and Men, Liam Gallagher (hopefully not throwing shade at this brother for once), Angels and Airwaves, Brittany Howard of Alabama Shakes fame, The Front Bottoms, The Darkness, and a slew more.

If you thought that was enough, then you would be wrong. According to the official poster for the event, more acts will be announced at a later date.

“I am really excited to bring our fans a lineup that continues to celebrate both up, and coming acts and established powerhouses like the return of headliner The Strokes and first-time headliners The Black Keys and The Smashing Pumpkins,” Shaky Knees founder Tim Sweetwood said in a press statement.

“To be able to produce a world-class festival in my hometown of Atlanta, year after year, is truly special.”

At the time of publication, it was rumored that over 65 artists will take over one of the four stages during the weekend-long show.

Shaky Knees will return to its home of Central Park in downtown Atlanta during the weekend of May 1-3. Tickets are currently on sale on the music festival’s website. There are several packages to pick from, which is good for people who may be strapped for cash cause you know, Black Friday and Cyber Monday are around the corner.

Check out the full lineup below. 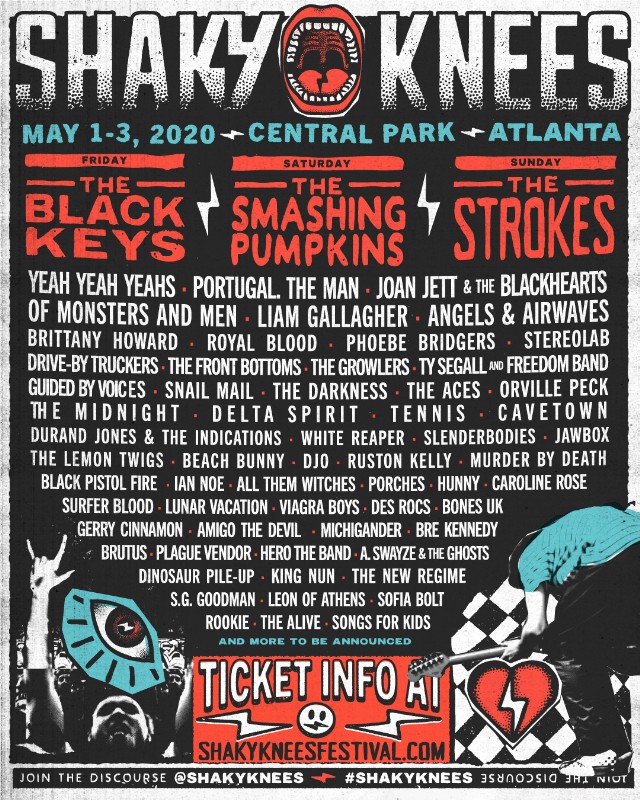