Family Feud is probably one of the best shows to watch if you ever need a good laugh. Whether it’s the fighting among the family or the things that come out of contestants’ mouths, there’s always something to laugh about.

Come on, there are so many compilations of Steve Harvey’s face when people say inappropriate things to last us the rest of the afternoon.

So what happens when you take the cast of The Avengers and put them in the Family Feud set up?

Last night, during their promotional round on Jimmy Kimmel Live!, Jimmy Kimmel pitted the cast against each other in Avengers Family Feud.

So many arguments and disagreements made the audience and viewers crack up including listening to Scarlett and Chris H. argue over whether or not “yoga instructor” qualifies as a profession that wears tights. Scarlett said “no” while Chris kept insisting on “yes.”

Guess who was right?

Anyway, check out the eight minute video below.

The Avengers: Age of Ultron hits theaters on May 1st. 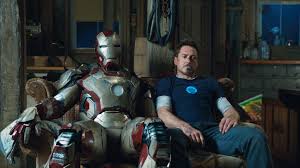 Joss Whedon sure knows how to make fans sweat because the director of last year’s hit film, The Avengers, had fans doing so for quite sometime when he said that there was a possibility that Robert Downey Jr. would not be returning to the franchise to take on his iconic role as billionaire, superhero, Tony Stark/Iron Man.

Whedon has also been confirmed to be returning to the franchise as both writer and director for the sequels to 2012’s highest grossing film. As of today, The Avengers which starred Downey, Chris Evans, Mark Ruffalo, Chris Hemsworth, Scarlett Johansson and Jeremy Renner has made over $1.5 billion.

Production on the sequel is scheduled to begin in March 2014 and will introduce new characters to the franchise as well as bring back some oldies and goodies like Stark and the rest of his world saving cohorts. By estimation, the sequel should hit theaters by May 1, 2015; a little under three years after the original film debuted.

Downey has been playing Tony Stark since 2008 when the original Iron Man premiered and went on to portray everyone’s favorite narcissists through Iron Man 2 and this year’s Iron Man 3.

Now all we have to do is sit back and wait for The Avengers 2, but that’s okay, all the other sequels to the individual Avengers’ films are coming our way fast. Thor 2: The Dark World, Captain America: Winter Solider…