It may be only October and we might not even have our Halloween costumes planned yet, but Clear Channel is already getting fans of the radio stations owned by the mega media company ready for their annual Christmas shows.

Today, KIIS-FM in Los Angeles and KDWB in Minneapolis have unveiled the performers to be gracing the stage at the respect Jingle Ball installments.

Like Los Angeles, many of the same artist will appear at the Minneapolis date, though some new artists will be traded for others. KDWB’s line-up will include: Ariana Grande, Iggy Azalea, Demi Lovato, Onerepublic, Meghan Trainor, Rita Ora, Jessie J., Kiesza, Nico & Vinz, Shawn Mendes, and Becky G.

As if the pop music phenoms slated to take the stage wasn’t enough, Nick Jonas has been tapped to host both days of Jingle Ball. Tickets for the annual mini music fests will go on sale on Oct. 18 at 10 a.m. via Ticketmaster.

Jingle Ball line-ups which are still missing include Philadelphia, New York, Boston, Chicago, Washington D.C., and Miami which will reportedly be revealed at 5 p.m. today. 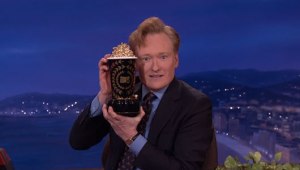 The MTV Movie Awards have officially called it a night and the winners of the fan chosen movie awards have now gone home with their golden popcorn award.

One of the most entertaining parts of the show was the opening sequence where host Conan O’Brien promised the “executives” at MTV that he could get 50 celebrity cameos. He went on to do so, including cameos from the cast of Seth Rogen, James Franco, Katy Perry, Taylor Swift, Andy Samberg and many more. O’Brein, sadly came up one short until Samberg remind him that he himself was a celebrity; hence hitting 50.

Oh yeah, there was also the part of the show where Zac Efron won “Best Shirtless Performance” and he wouldn’t take off his shirt, even with the audience cheering him on, so Rita Ora took it upon herself to give the crowd what they wanted.

Best Fight: Orlando Bloom and Evangeline Lilly Vs. The Orcs, The Hobbit: The Desolation of Smaug