The highly anticipated Foo Fighters’ show in Richmond, VA has now come and gone thanks to the band and the guy behind the crowdsourcing campaign, Andrew Goldin.

During the show, the band played some of their biggest hits as “Big Me,” “The Pretender,” “Learn to Fly,” “Everlong” and of course “Times Like These” which was part of their three song encore.

In the middle of the show, frontman Dave Grohl paid a special tribute to a Richmond legend who sadly passed away back in March from and accidental overdose, GWAR frontman Dave “Oderus Urungus” Brockie.

“[He gave me] one of the greatest compliments, or non-compliments, I’ve ever gotten in my life,” Grohl began.

“I remember seeing this interview with Dave Brockie where they asked Brockie about [GWAR’s] Grammy nomination, and somehow, he made his way to me and he said, ‘Dave Grohl? He’s actually had teeth removed so he could fit more Grammy dicks in his fucking mouth.’ So, right now, I’ve gotta give t up for Brockie. C’mon, let’s give it up to Brockie.”

It seems like the other members of GWAR were so impressed and touched by Grohl’s tribute to their late leader, they decided not to “kill” the musician.

Guess he dodged a bullet there.

Check out some fan shot footage from the show.

Showing the power of social media, tenacity, and hope , all 1,400 fans that attended the event paid for their tickets way ahead of time, even before the band officially agreed plans to perform at the event. Now, that’s all a whole lot of faith, trust, and pixie dust.

As if the Foo Fighters weren’t already a cool enough band, the band have now been elevated to super cool status just by agreeing to perform in Richmond, VA which was all funded by a crowd sourcing fundraiser that they didn’t even know existed. On Friday, the band revealed the good news on Twitter.

The idea for this all came from the mind of Andrew Goldin, a freelance creative director and copywriter, who wanted to being the Dave Grohl-fronted band to his hometown of Richmond where the band last performed at in 1998.

Goldin and his fellow organizers set a goal of selling 1,400 tickets at $50 a pop to a show that actually did not exist at all at first in an effort to get the band to notice the stunt. The deal was that donors’ credit cards would only be charged if the show sold out, and the contributions would be returned if the band didn’t agree to play.

As of today, the campaign had raised $70,026, surpassing its goal of $70,000. Two local businesses, Brown’s Volkswagen and Sugar Shack Donuts, donated $5,000 each and planned to give away all the tickets they received for their contribution.

“Rather than waiting, and waiting and waiting for our favorite band to come to us, we’re making it happen,” Goldin said in his mission statement for the project. “We’re selling tix to a Foo Fighters concert that the band doesn’t have scheduled yet in the hopes that they’ll come to our great city and play a show. Then if the band comes we all rock out. If they don’t come, everyone gets their money back. Every cent. So buy your tix, spread the word, and let’s make some rock-n-roll history.”

And that they did.

The venue and the date for the show have not been determined yet. Watch the mission video below as the people of Richmond make their case to the Foo Fighters, which as now we know, got them to their goal. 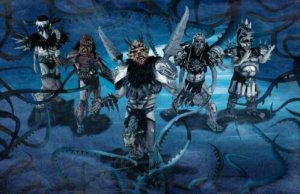 GWAR have revealed that they have plans to erect a monument in honor of their late frontman, Dave Brockie aka Oderus Urungus. Brockie sadly passed away last month, though at the time there was no confirmed cause of death.

In honor of him, the remaining members of GWAR have launched the Dave Brockie Foundation in order to help raise funds for the monument as well as to help promote music and performance in the arts.

In a video statement which can be seen below, the band reveal their plan for the monument and the new foundation they have founded. There is also a very touching part in which they reveal what Brockie would have thought of this. “Just face it – Oderus would order you to be present and pay tribute to Dave Murray Brockie, his own personal slave! Oderus did always consider you his children, but I know for a fact that Dave thought of our fans as his family.”

The current plan is to build the monument in Richmond, VA where Brockie lived and sadly passed away. Fans of the band who feel generous and would like to donate to the monument found, you can head on over to the official page for that on GWAR’s website.

As recent as January, Brockie was on Twitter telling fans to keep their eye open because there was a lot of good news coming their way, more specifically a tour in celebration of the band’s 30th anniversary and their yearly GWAR-B-Q which was slated to take place in August.