It’s only been four years since Good Charlotte announced they would be going on hiatus, but now it appears that it’s time for the Maryland-based band to come back from the dead. On Tuesday morning (Nov. 3), the band’s Twitter account was updated with a new picture of the five-piece with the Alternative Press logo and “#WelcomeBackGC” printed on it (as seen above). Along with the image, a link was also posted.

Once the link was clicked, it would send the social media follower onto the band’s official Tumblr page which displayed another link; this time, a link back to Alternative Press. There, on the Alternative Press page is a slight article about the band’s return as well as a snippet of a brand new song. Listen to the snippet of the new song here.

Since the announcement of their hiatus, it appears that most of the members have been keeping themselves busy. Joel and Benji Madden went on to put out an album titled Greetings from California back in 2014 as the Madden Brother (we know, big shock) while guitarist Billy Martin has been keeping himself busy with his art and attending comic book conventions. As for Paul Thomas (bass) and Dean Butterworth (drums), we aren’t quite sure what they’ve been up to in the last four years.

The end of the hiatus shouldn’t come as that much of a big surprise. Earlier this year, the band contributed a song titled “Game On” featuring Waka Flocka Flame to the soundtrack of Adam Sandler’s video game inspired film, Pixels.

So this begs the question, are we pumped for Good Charlotte to be back?

With all the good Sum 41 news that has been coming our way over the past few months, frontman Deryck Whibley has revealed some more.

Last week, Whibley sat down with Alternative Press to discuss the resurrection of the band following the health issues that almost killed him last year which, in a way, resulted in the band’s reunion.

Making their official performance reunion at the Alternative Press Music Awards last month and before that announcing a new album was currently in the works, Whibley confirmed that former guitarist Dave “Brownsound” Baksh had returned to the group and will be featured on the new album; the first since 2004’s Chuck.

When discussing Baksh’s return, Whibley admitted that somethings have changed since Baksh left the group in 2006 like them getting a little bit wiser and maturing some.

“It’s the answer to ‘What if?’ The answer to ‘Why?’ The chance to prove that that was just a moment in time where I got overwhelmed. I took a lot of time to … really wrap my head around the responsibility of being in a band,” added Baksh.

As for new music, which seems to be the biggest question since they confirmed a new album was in the process of being made, Whibley admits that they currently have several songs recorded.

“Recording-wise, there’s about 6 or 7 songs recorded. But the thing is, I just keep writing new ones … but I am going to stop it at a point. It’s not going to keep going. For the next few months, it’s just writing and recording and then I hope it should be getting ready to be done. Then we have to figure out our label situation. I just really want to get back on the road. I hate being in the studio.”

Six to seven new songs is a great start especially for a band that could have considered DOA this time two years ago. 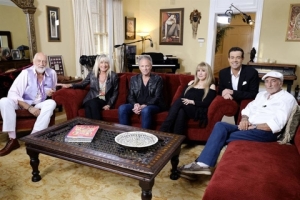 Diehard Fleetwood Mac fans, the rumors were true! Stevie Nicks and company are heading out on a full tour later this year.

The North American reunion tour was announced this morning during NBC’s Today show and will be their first time hitting the road since singer-keyboardist Christine McVie rejoined the band following a 16-year break. McVie’s last show with the band was back in 1998 during their “Dance Tour.”

Back in January, McVie’s publicist had confirmed that she had rejoined the band, a rumor that had been running around the web since September 2013. After that confirmation had been made, there had been some hinting that a tour announcement would be made as well.

In an interview, McVie revealed that the real reason she stopped touring with the band was because of her fear of flying and noted that she hasn’t flown in 15 years. Nicks though, had said that she really though that McVie would never come back to the band once she had left.

The tour has officially been named the “On with the Show” tour which will visit 33 cities and have a total of 34 shows. The first stop of the tour will be in Minneapolis on September 30 at the Target Center. After an almost three-month trek around the country, the show will wrap up in Ft. Lauderdale on December 19 at the BB&T Center. Fleetwood Mac’s last full-scale tour was back in 2012.

General admission tickets through LiveNation will go on sale beginning on March 31 while the band are set to return to the Today show on October 9th to perform. All the tour dates can be seen below.

“ON WITH THE SHOW” TOUR DATES:

Outkast might have taken a break for a longtime, but now it looks like the duo are coming back with a fiery passion.

Yep, we almost couldn’t believe that when we first read it, but alas, it’s true.

“It’s truly an honor to celebrate 20 years and still be free to do music the way we choose,” said Big Boi. “Don’t just think outside the box, know that there is no box. I’m looking forward to rocking the stage with my Bro Ski and to all the fans — stank you smelly much, this is for y’all!”

“And imagine, all we wanted to do was rap. I am thankful to have been a part of a group that allowed me to explore anything that came to mind and have fun doing it. Returning to the stage together is the most exciting way for us to thank everyone for their 20 years of supporting Outkast,” Andre 3000 added.

They’re show at Coachella in April will mark the 20th anniversary of their debut album Southernplayalisticadillacmuzik. As for those “over 40” festivals, Coachella is the only one that has been confirmed at the moment, but we’re sure those events will be announced soon.

Even though Big Boi and Andre 3000 took a break from their group doesn’t mean that they shafted the music world during their time off. Big Boi went on to release two solo albums while Andre 3000 did launch a clothing line as well as worked on Beyonce’s contribution to The Great Gatsby Soundtrack (that cover of Amy Winehouse’s “Back to Black) and will star as Jimi Hendrix in the upcoming bio-pic.

That is the sound of thousands of Sherlockians celebrating the fact that their show is almost back. After waiting almost two years, the return of everyone’s favorite detective is so close, they can taste it.

Thanks to co-writers, Steven Moffat and Mark Gatiss a seven-minute mini-sode has been released to tide over those poor unfortunate souls until the show is officially released. It had been previously reported that the mini-sode would be released soon, and it looks like the BBC has taken pity on fans’ souls and gave it to them as an early (or not early) Christmas gift.

The episode titled, “Many Happy Returns” find Inspector Lestrade talking to a man who claims that there have been sightings of the detective since his demise two years previous. Lestrade, knowing full well that Sherlock is dead keeps waving off these claims. He goes to see a friend, a still very sad Watson, and gives him an uncut version of the birthday DVD that Sherlock had given him for his birthday.

Check out the full episode below and get excited for the season three premier which happens on January 1 in the U.K. and January 19 on PBS Masterpiece in the United States. 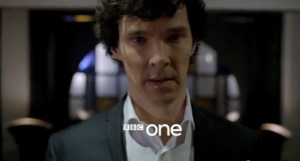 When fans of Sherlock last saw the iconic detective last season, he was taking a nose dive off of a building much to the dismay (understatement) of all loyal fans and of course his close companion/friend, John Watson. The trailer for the new and highly anticipated season made its way onto the internet, proving what fans have been saying since that episode: Sherlock Holmes is not dead.

The barely 30 second clip, shows how each of the characters of the series react when they find out that Holmes is indeed not dead like dear Mrs. Hudson while doing the dishes, Molly sees his reflection, Detective Lestrade in a dark corridor, Holmes’ older brother Mycroft in his office  and of course Watson while sitting in a restaurant (with a snazy new mustache).