Fans of Of Mice & Men who were slated to see the final days of the band’s current tour were given some disappointing news; the shows have been cancelled.

Over the weekend, frontman Austin Carlile was admitted into the hospital and was advised by doctors to stay overnight, though there has been no word on what exactly led to Carlile being admitted in the first place.

The band took to Facebook after his admittance to release a statement about the cancellation of the final dates of their tour and how they will make it up to those unfortunate fans.

“Of Mice & Men regrets to announce that the remaining dates of the ‘Full Circle Tour’ will be cancelled. Therefore, tonight’s [Sunday’s] show at Soma in San Diego and Tuesday’s show at El Plaza Condesa in Mexico City will no longer go ahead. Lead singer Austin Carlile was admitted to a hospital yesterday morning and per doctor’s orders has been kept in overnight for evaluation. The band regrets not being able to perform for their fans and hopes to be back in both cities as soon as possible. Refunds for both shows will be available at point of purchase, however Of Mice & Men are planning to reschedule both shows for a later date in the year. We will have more news on this in the coming weeks and tickets holders are welcome to retain their tickets, as they will remain valid for these rescheduled dates.”

In a twist, as pointed out by Loudwire, this isn’t the first time the band has had to cancel tour dates due to Carlile being hospitalized. Last year, the band has to cancel some European stops because Carlile had gotten a neck injury that he never got checked out. It ended up pushing at the back of his heart and due to previous heart issues, he had to remain hospitalized for several days.

Of Mice & Men will be heading out on tour this Spring in support of the re-issue of their 2014 album, Restoring Force.

The tour will feature the California band headlining all dates (minus three stops) and support from Crown the Empire and Volumes.

The tour will begin on Apr. 28 at Revolution Live in Ft. Lauderdale and wrap up a month and a half later on June 7 at Soma in San Diego.

On the tour schedule, which can be seen below, the band reveal that there will be a couple of dates which they will not be headlining. Those three stops are three different music festivals that they will be performing at. Those include:  Carolina Rebellion that will take place in Charlotte, NC; the first annual Rock in Rio due to take place in Las Vegas (they will be performing during the festival’s “Rock” weekend); Columbus, OH’s Rock on the Range; and Pryor, OK’s Rocklahoma.

May 6 – Silver Spring, MD @ The Fillmore

Last week, Of Mice & Men released the music video for their new song “Broken Generation” from Restoring Force: Full Circle which is scheduled to be released on Feb. 24 through Rise Records.

Of Mice & Men have just released their music video for their song, “Broken Generation” from their upcoming reissue of 2014’s album of the same name, Restoring Force: Full Circle.

With a title like that, it gives the impression that the California band have a lot to say about the generation that makes up part of their fanbase.

Fitting with the song of said broken generation is its music video showcasing what has become the norm in the 2000’s; everyone so glued to their electronics that they don’t even notice the things happening in front of them.

We especially loved the parts of the people at the party on their phone s rather than socializing with one another and the customer at the restaurant completely oblivious to the waitress because she’s on her phone. Sadly, it has become the norm and what’s even more sad are those that always say they will “die” if they can’t have a phone on hand (or those that are always frantically looking for an outlet to charge).

Watch the music video below.

Restoring Force: Full Circle will be released on Feb. 24. 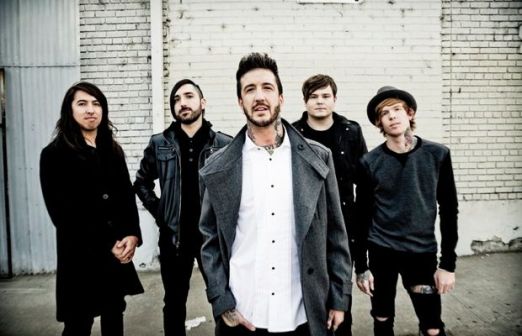 Of Mice & Men are about to head out on “The Hunting Party Tour,” Linkin Party and Rise Against’s major arena tour, but before they can get to that trek in mid-January, the band have revealed plans to re-release their third studio album.

The re-issue will be titled Restoring Force: Full Circle and is set to be released on Feb. 24 through Rise Records; a week or so after they finish up the Linkin Park tour.

The album art for the re-release as well as the track list can be seen below.

Pre-orders are currently on the band’s official website where they give fans a variety of bundle options to choose from.

As for “The Hunting Party Tour,” that will kick off on Jan. 15, 2015 in Orlando with stops in several North American cities before wrapping up on Feb. 14, 2015 in Edmonton, Alberta in Canada. Those dates can be seen here.

This past weekend, Of Mice & Men revealed that they would be releasing a new song soon and today, fans of the California-based band were given an early Christmas gift in the form of the new song. The song is titled, “Bones Exposed” and will be featured on the band’s upcoming new album.

The new album is titled, Restoring Force and will be released on January 28 through Rise Records. Recently, they announced that they will be heading out on a North American tour titled, “The American Dream” Tour with Bring Me the Horizon. The tour will begin on February 3 in Orlando and wrap up on March 28 in San Diego.

For now, check out the new song below.

OF MICE & MEN//BRING ME THE HORIZON TOUR: