Snoop Lion (Dogg) last week gave us a second new song from his upcoming album, Reincarnated which featured his daughter, Cori B and fellow rapper Drake. Now, Snoop is giving fans not only the cover art for the new album that is due out on April 23, he’s also included the full tracklist.

As can be seen below, Snoop has a lot of guests on his tracks including Rita Ora, Akon, Busta Rhymes and “I’m-Not-Hannah-Montana-I’m-A-Badass” Miley Cyrus.

Until the album gets released, you can either check out Snoop’s most recent release, “No Guns Allowed” on Soundcloud, or the video for “Lighters Up” right here: 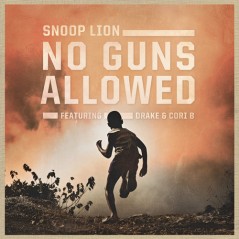 Snoop Dogg or should I say Snoop Lion just released a new track that features a collaboration with daughter Cori B and hip-hop heavy weight, Drake. The song, “No Guns Allowed” is supposed to be a “non-violence anthem” hoping to “spread the message of non-violence and the importance of unity and peace,” according to a press release.

The full track can be heard below which features Drake reciting a verse about friends who were involved in gun violence. (e should have probably included his Degrassi character on the list).

The song will be found on Snoop’s upcoming reggae album, Reincarnated which will be released on April 23.