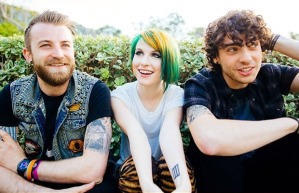 It’s been four days since news broke that Robin Williams passed away at the age of 63 from suicide in which he hung himself with a belt in his room and we all know how many fans are still in mourning.

During a recent stop on their co-headlining MONUMENTOUR with Fall Out Boy, Paramore paid tribute to the late comedian.
The frontwoman, who seems to have fully recovered since the band had to reluctantly cancel several show a couple of weeks back, gave a touching speech before dedicated their song, “Last Hope” to the late actor.

The speech begins with Williams reminiscing about the past ten years that the band had been on the road, from their beginning as this little unknown band, to now selling out arena and how there was a time where they were not happy at all and were in a place that was “depressing.”

Check out the fanshot video filmed at Red Rocks Amphitheater in Morrison, CO this past Tuesday (August 12).