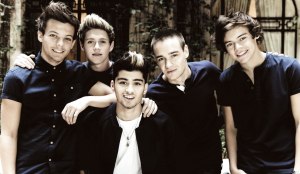 The Westboro Baptist Church strike again, but this time the ones on the receiving end of the protest are speaking out against the pig-headed group.

Last month, WBC has called on their cohorts to petition One Direction’s July 19 show in Kansas City, Mo. on the basis that the band members are “perverts” and that they represent the “sin-chasing, fag-enabling, God-hating, Christ-rejecting” United Kingdom.

The group’s biggest issue is how the members of the band touch each other inappropriately which fans have just shrugged off as being the norm for the five guys.

“These freaks and their fans think it’s funny for these five perverts to grab each other’s asses on stage,” read the group’s June statement. “They glamorize sin and make a mock of God’s standards. Their one purpose is to encourage the youth of this generation to pursue every lust their evil hearts can imagine.”

On Friday, the protesters got their wish as fellow member showed up with signs that read, “God Hates the UK,” “God Hates Sluts” and “United U Fall.” But while some artists would try to forget about the picketing group, Harry Styles spoke out on Twitter with following message: “Despite the company outside, I believe in equal rights for everyone. I think God loves all. Thanks for coming to the show though.”

The group followed it up by thanking the boy bander for bringing attention to God’s words.

A few weeks back, the group said that they would be protesting against Taylor Swift because she promotes “being a whore.” On Saturday, they planned to protest Train while Sunday, their victims of choice were Boyz II Men, 98 Degrees and New Kids on the Block.

This isn’t the first time that the word “fag” has been thrown around the group; some people often wonder if Styles and bandmate Louis Tomlinson were more than friends. However, they have denied any of that type of talk.