The Pitches are back in action.

That’s right, three years after the release of Pitch Perfect, the sequel which also happens to be one of the most anticipated movies of the summer, has officially been released to the world.

Instead of giving a recap of the plot which we’re sure every movie reviewing site has already done, we’re just going to give you the complete soundtrack to listen to for the first time unless you’re one of the people who were lucky enough to attend a pre-screening or saw it at midnight.

The soundtrack, much like the original film’s includes several kinds of remixes with one basic theme. This record has a Christmas remix featuring “Winter Wonderland/ Here Comes Santa Claus,” a booty-centric jam featuring songs like “Thong Song,” “(Shake, Shake, Shake) Shake Your Booty,” “Low,” “Bootylicious,” “Baby Got Back,” and Jessie J’s new song “Flashlight” which was made for the soundtrack.

Pitch Perfect 2 hit theaters today, May 15 while the soundtrack was released this past Tuesday, May 12.

The girls are back in the first official trailer for Pitch Perfect 2. The 2012 sleeper hit has managed to go from mediocre screenings to pop culture hit since its release two years ago making its sequel on of the most anticipated film of 2015.

In the trailer, we are instantly greeted by a slowed-down version of Beca’s (Anna Kendrick) “Cups” featuring the Bellas. As the trailer progresses, we find out that they’re on their way to performing at World Championship of A Capella. Apparently, no American team as ever won.

Check out the trailer below which features all the girls including Beca, Fat Amy, Chloe and the new additions to the Bellas as well as the guys from the Treblemakers, though you only see them for like a split second in the trailer, and yes, even Bumper is back.

No official date has been given for the released of Pitch Perfect 2 though the trailer does say “This Summer,” but the Summer is long, so we’ll just wait here as we listen to the Pitch Perfect soundtrack on a loop. 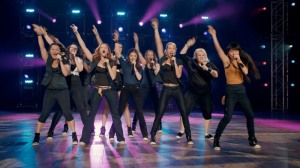 Pitch Perfect was one of last year’s surprise hits and we can all see why with its unique story line, amazing cast and of course, killer tunes. Considering the way the film instantly became a classic, it was a little surprising that not many college a cappella groups were recreating some of the scenes from the film just for the fun of it.

Recently, a video featuring the co-ed a cappella group from Furman University named the Furman FUtones has made its way onto the internet. In the video, you see the group get split in half to recreate the “riff-off” scene from the film where the members from the many a cappella groups come together to sing songs with a common theme; for them it was “songs about sex.”

Watch the group take on the scene and try your hardest not to have the urge to re-watch the film for the 50th time or listen to the soundtrack.