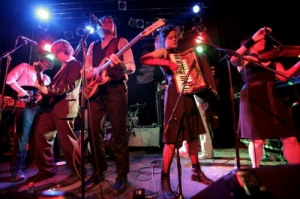 What happens when you combine members of The Arcade Fire, Bon Iver, and The Strokes and have them perform songs from Phil Collins and fellow artist, Jack White?

You get something call the Pop All Star Band, but don’t expect for this supergroup to go on and become a powerhouse of indie players.

Last week, Win Butler and his brother Will were joined on stage by Bon Iver’s Justin Vernon and The Strokes’ Nikolai Fraiture during a show in Montreal; the Arcade Fire’s hometown.

The special one-off performance happened during the halftime show of the Butler brothers’ annual Pop vs. Jock charity basketball game (you know, the one that Win always gets way into and does stupid stuff?).

The randomly chosen group, which also included the Arcade Fire’s Regine Chassagne took on Phil Collins’ “In the Air Tonight” as well as The White Stripes’ “Seven Nation Army.”

As for the game itself, it looks like the Butler brothers’ team won which would explain why there hasn’t been any story as of yet of Win throwing a hissy-fit over a bad call.

Check out the video of the supergroup performing both tracks. 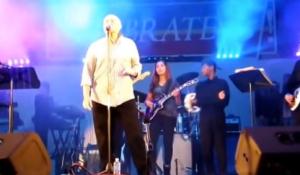 It’s been nine years since Phil Collins has performed “In the Air Tonight,” but armed with an unusual band, the singer not only performed his signature solo song, but he also performed Genesis’ “Land of Confusion.”

Last week, Collins appeared at Miami Country Day School where audience members’ were thrown from a loop when they saw the musician take the stage. But while it might seem like a strange way to begin as comeback, it’s a lot more than what was being done before.

Collins has been away from the spotlight for some time with his last album of original material, 2002’s Testify, being released 12 years ago while his last major live performance taking place in 2010 while promoting his Motown covers album, Going Back.

While in 2012 he discretely said he would be putting music on the back burner, while promoting the Tarzan musical in Germany, he revealed a change. “I have started thinking about doing new stuff,” he said. “Maybe playing some shows again, even with Genesis. Everything is possible. We could tour in Australia and South America. We haven’t been there yet.

Just this past January, he revealed to a Florida magazine that he had already begun writing new music with chart-topper Adele.I’ve just started to work with Adele,” he said. “I wasn’t actually too aware…I live in a cave, but she’s achieved an incredible amount. I really love her voice. I love some of this stuff she’s done, too.”

So far, no other information has been given about the Adele project or if a new album will be in his immediate future, but for now, you can watch Collins being backed by his band of youngsters.