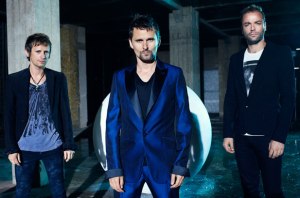 Muse have released a new version of the music video for their new single, “Panic Station.” The video features the group dressed in flamboyant outfits from the 80s including fur coats and neon colored clothes in Japan. They’re on a journey to defeat the bad guys but somehow end up going to a trippy club, aka Panic Station.

Partying with a dancing octopus, a large electronic woman and a T-Rex? Yeah, trippy might just be an understatement.