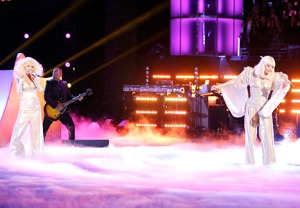 We’re sure that when Lady Gaga was announced to perform on The Voice season finale, nobody guessed that the pop star would be taking the stage with one of the judges to put on one the most stellar performances. The performance was so good, that it even outshone the winner of the season (it was Tessanne for those that haven’t gotten the results yet).

“Here’s ‘Do What U Want feat. Christina Aguilera’ STUDIO Version. http://smarturl.it/DoWhatUWantX  pink champagne, gold lame, hair, and fearlessness,” Mother Monster wrote on the social media site to get her Little Monsters excited for the new year.

Aguilera tweeted something similar to Gaga’s message; “Happy New Year! Loved performing #DWUW with @LadyGaga so we made a special version just in time for NYE! Xo Xtina http://smarturl.it/DoWhatUWantX.”

Up until the performance which took place last month, there had been some rumors that the two divas were in an intense fight. All that went out the window when they took the stage.

“I was really excited because The Voice called and wanted me to perform on the finale and I obviously can’t refuse,” said Gaga about getting the opportunity. “It’s such an amazing show and I said, ‘I’ll do it, but I want to know if Christina will do it with me.”

“This is the first time we’ve ever met and I have to say, when I heard she wanted to collaborate I said, ‘Of course! Lady Gaga!’ I’ve been waiting to meet her. She’s such an innovative artist and a risk taker and as a fellow female, I have so much respect for that.”

“She’s the most down to earth real person that I’ve ever met in this business. Female to female in this industry, it’s really hard to find that kind of a person,” Aguilera added. “I love you girl, and you deserve everything that you’ve earned.”