South by Southwest will be returning to Austin, TX next March, as always, and today the festival has announced the first wave of artists who will be performing at the annual event.

At the end of the full reveal, there will be over 1,000 acts descending in Austin for SXSW.

SXSW will take place from March 13 to March 22 with the musical portions of the event taking placing from March 17-22. If you’re interested in going, don’t wait too long, badges to attend are currently on sale on the festival’s website.

Remember how a few months ago, there was a list going around the web letting fans know how much it would cost to have your favorite artists perform for you?

Well, it looks like there has been some new developments with that list. Turns out, the information that Degy Entertainment, the people who composed the actual list, used wasn’t exactly up-to-date. As was pointed out by Business Insider, the company did not “verify the veracity or timeliness of the list.”

Instead of pointing out all the flaws within the list, Business Insider teamed up with CelebrityTalent.net to reach out to managers in order to get a more accurate list of booking fee.

You can check out some of the brackets where your favorite artists fall into below, but to see the complete list, head on over here. 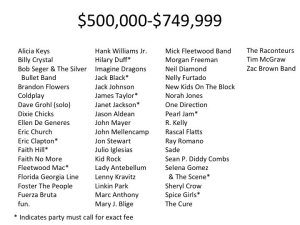 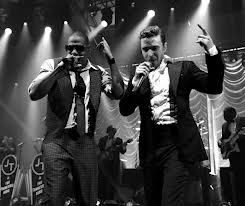 After the George Zimmerman/Trayvon Martin ruling two weeks back, many artist have come out of the woodwork to protest the state of Florida over a reason that no one truly knows. Whether it’s the ruling (just for those that are not familiar, Zimmerman was found not guilty) or the actual “Stand Your Ground” law, artist were rumored to be protesting the state (you read right, the state, not just that particular city).

Word got around yesterday through the Huffington Post that artists such as Justin Timberlake, Jay-Z, The Rolling Stones and many more would be staying clear from Florida due to the verdict outcome. The Monday after the verdict, Stevie Wonder had come out saying that he would not be entering the state of Florida for anything as a protest. Today, it turns out, many of the representatives are coming to the defense of their performers saying that their clients had never heard of or been contacted about the list.

American Urban Radio Network’s White House correspondent April Ryan first reported the list, claiming that she had gotten the information from credible  “sources close to the Stevie Wonder camp.” The Huffington Post had said that they were at the time trying to contact the artists’ representatives even though they had posted the list. At the time, the only representative that had gotten back to them was Rihanna’s who revealed that she was not involved. MotherJones got word that The Rolling Stones had not even heard about the campaign.

When doubt started to reach an all time high, Ryan released a statement on her website where she explains that she got a ext in the middle of the night from someone who were “in support of Stevie.” Her statement could be seen below:

I obtained from multiple sources early Monday a list of artists and entertainers who my sources told me had committed to a boycott of Florida following the George Zimmerman acquittal. Since publishing that list I have heard from several representatives of the artists named who say, on behalf of their clients, they are uncomfortable being identified on that list and are seeking additional information.

Additional representatives have come out to debunk that their clients, who were on the list, were even aware that their names had been put on the list of protesters, which begs the question, if Ryan didn’t put this list together then who did?

Supposedly protests not only those mentioned above, but also

In what might be considered one of the most anti-climatic reveal of this year, the Lollapalooza line up has been revealed. The good news for all that saw the leaked photo (which was uploaded here this past weekend), everyone on that list was spot on correct.

Lollapalooza will take place in Chicago from August 2-4 at Chicago’s Grant Park. Last week, super secret special tickets were on special, but sold out in record time just like the 3-day passes. A limited number of single-day tickets will go on sale on April 3 at 10 a.m. CST on Lollapalooza’s website.

Check out the full line-up of acts here.