Ladies, gents, and music lovers of all ages, it’s time to welcome the Rock and Roll Hall of Fame’s class of 2020!

On Wednesday (Jan. 15), the Rock and Roll Hall of Fame formally announced this year’s inductees, and it’s definitely a diverse list.

In a surprising twist, a slew of first-time nominees earned positions in the hall of fame, including the Doobie Brothers, the Notorious B.I.G., T. Rex, and Whitney Houston.

For Nine Inch Nails and Depeche Mode, third time’s the charm as they also join the list of inductees for the 35th annual event.

The Dave Matthews Band won the fan ballot but sadly did not make the final cut once again confirming just because the fans like it, doesn’t mean the industry insiders do.

The Rock and Roll Hall of Fame announced the 2020 nominees in October with several return nominees. This year marked the sixth time Kraftwerk had been nominated, the fifth time for MC5, the fourth for Rufus featuring Chaka Khan, and the second for Judas Priest and Todd Rundgren.

The Ahmet Ertegun Award “honors songwriters, producers, disc jockeys, record executives, journalists, and other industry professionals who have had a major influence on rock and roll.”

For an artist to be eligible to be inducted into the Rock and Roll Hall of Fame, their first recording must have been released at least 25 years ago.

The Rock and Roll Hall of Fame 2020 Induction Ceremony will take place at Public Auditorium in Cleveland on May 2. The show will broadcast live on HBO at 8 p.m. ET.

Tickets will go on sale to the public on Feb. 27. Performances and special guests will be announced at a later date.

Ladies and gentlemen. Boys and girls. Music lovers of all ages, the Rock and Roll Hall of Fame nominees are finally in!

On Tuesday (Oct. 15), the Rock and Roll Hall of Fame announced the lengthy list of nominees for the 2020 class. As with past years, the musicians on the roster come from various music genres, which may lead to a debate or two among fans (there’s already some online “conversations,” but when doesn’t that happen?).

The class of 2020 also marks the first time that the majority of the candidates are first-time nominees.

This will be the sixth time Kraftwerk has been nominated, the fifth time for MC5, the fourth for Rufus featuring Chaka Khan, the third for Nine Inch Nails and Depeche Mode, and the second for Judas Priest and Todd Rundgren.

It was reported that artists such as Aaliyah, Weezer, blink-182, and Daft Punk were eligible but were not nominated.

For an artist to be eligible to be inducted into the Rock and Roll Hall of Fame, their first recording must have been released at least 25 years ago.

While a lot of the voting power sits with industry insiders, fans are going to get a chance to put their two cents in.

Through Jan. 10, fans can go to Google and search “Vote Rock Hall 2020” or any nominee name plus “vote” to cast a ballot with Google. They can also head on over to the Rock and Roll Hall of Fame’s website or the museum in Cleveland to chime in.

The top five artists chosen by the public will make up the “fans’ ballot” joining the industry insiders’ votes.

The Rock and Roll Hall of Fame 2020 Induction Ceremony will take place at Public Auditorium in Cleveland on May 2, 2020. The full list of nominees can be found below.

When Glastonbury isn’t letting the selfie generation know that this festival is a “selfie stick optional” event, they are revealing the super long and jammed packed line-up for this year’s event.

Previously, festival organizers had revealed that acts likes Kanye West, Foo Fighters, The Who, Florence and the Machine, Pharrell Williams, Alt-J, Lionel Richie, Motorhead, Patti Smith, and many, many more would be making the trip to Pilton, Somerset (England) at the end of the month for the five-day music event.

With about three weeks left until gates open to let in all the musical craziness, organizers revealed the rest of the long list of acts.

Check out some of the new additions, and the official poster with the updated line-up, below.

Russian band Pussy Riot will also appear at the event for a “live conversation” while Stephen Hawking and the Dali Lama will also make appearances.

It’s starting to feel a lot like music Christmas thanks to Riot Fest unveiling the first wave of artists for their Toronto dates, set to take place on Sept. 19 and Sept. 20 at Downsview Park..

Wu-Tang Clan, Frank Turner, Alexisonfire, and Thrice are just some of the big names heading to Canada for the weekend-long festival.

But don’t get too upset that some artists have been left off the initial release; apparently five names are going to be kept a secret until June 16.

For now, check out the mighty jammed line-up below and if you live in Canada or want to make the trek to Toronto for the show, we suggest buying your tickets after you check out the list. 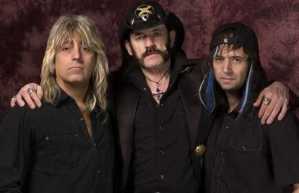 First, it was moshing. Then, it was crowd surfing. Now, it has been reported that headbanging can be harmful for your health.

According to a group of German doctors who had been treating a man who a serious case of headaches that got worse with each passing day, the cause of it was due to excessive headbanging.

The 50-year-old man with the worsening headaches is a huge fan of Motörhead and had recently attended a concert with his son. After going in for a check up and getting a scan of his brain, doctors found that a part of his brain was bleeding and that they need to drill a hole to drill the blood. In the follow-up exam, it was discovered that the man had developed a benign cyst, making him more vulnerable to brain injuries in the future.

When they looked into the man’s history, they noticed he had no previous head injuries, substance abuse or anything that would lead to the bleeding in his brain, so doctor concluded that it was all due to excessive headbanging.

“We are not against headbanging,” Dr. Ariyan Pirayesh Islamian, one of the doctors who treated the man, told The Associated Press. “The risk of injury is very, very low. But I think if (our patient) had (gone) to a classical concert, this would not have happened.”

Though that was Dr. Islamian’s take on the situation, Dr. Colin Shieff, a neurosurgeon and trustee of the British brain injury advocacy group Headway, told the publication, “There are probably other higher risk events going on at rock concerts than headbanging. Most people who go to music festivals and jump up and down while shaking their heads don’t end up in the hands of a neurosurgeon.”

In other words, do what you do guys. Practice headbanging with caution.

When do you know that the trend of having band-oriented cruises have become a thing? When one of metal’s biggest groups decides to put one together.

Bands and cruise have recently become a trend with bands such as Weezer with last week’s Weezer Cruise, Paramore with their upcoming PARAHOY!, the Backstreet Boys with their cruise, Train and even some festival taking to the high seas rather than a festival ground to perform. Today, another band has been added to the list: Motörhead.

Lemmy has revealed that he and the boys will be heading out on a cruise which they have dubbed, Motörboat. The cruise will make its maiden voyage this upcoming fall, though dates and other artists that will be onboard to perform will be announced at a later date.

Lemmy’s health has been a concern as of lately, but in order to announce such an adventure, he must be a little better than it had previously been reported. Check out the official poster from the band below and tell us if you’re down with this new music trend.

Last week, word spread that Motörhead would be cancelling several of their upcoming European tour stops while frontman, Lemmy Kilmister recovered from a post-operative hematoma.

While he is currently “alive, breathing, talking, f**king, drinking, eating, reading” (according to his management) he is not well enough to continue on the band’s tour. The tour dates that have been scrapped, for now, includes six festivals that they were supposed to perform at including Metaltown in Sweden, Reload in Germany and Festival Les Deferlantes in France.

The original thought was that the frontman would rest up for a couple of  days, miss a few dates and be ready to return to the stage in no time. Due to doctor’s orders, he was advised to take more time off to recover.

Today, Kilmister released a personal statement on his Facebook page, filling fans in on the situation about his health. The full  statement can be read below:

Regretfully, Motörhead announces it has had to cancel its remaining six summer festival appearances. The band hate to let their fans down by missing any shows, but they expect to be back in full force this Fall.

As you may have heard, earlier this Spring Lemmy had some medical maintenance for the long-term good, He was, at that time, advised to rest, but once feeling better, he of course resumed his life as usual. He has since been advised that he should immediately take some more time to rest

Lemmy says: I’d like to thank everyone who wish me well, it was a tough decision for me as I don’t like to disappoint the fans especially in times where economy is bad and people spent their money to see us. But sometimes you can’t do anything else than following doctor’s orders, but be sure we will be
back and kick everybody’s ass.

There you have it! You can now stop worrying, redirect those cards, flowers and chocolates to a loved one (who will appreciate them far more), keep calm and carry on! Lemmy and Motörhead certainly are! Thanks and see you in the Fall for their new album in the form of a massive Aftershock…”

This isn’t even the first health issue that has plagued the metal icon; he was recently fitted with an implantable defibrillator to correct an irregular heartbeat.