With two weeks until Christmas, Doctor Who fans were starting to feel the pressure as the annual Christmas special is around the corner.

This year, like several times before, we will be saying good-bye to our favorite bow tie and fez wearing, floppy-hair, twelve-year-old acting Doctor in exchange for yet to be specified Twelfth Doctor.

The trailer starts with the Eleventh Doctor’s current companion, Clara Oswald (Jenna Coleman) reciting a rhyme which pretty much summarizes (reread the italicize rhyme up there) what fans have been anticipating, in a sad way, since Matt Smith announced that he would be bowing out of the iconic role that made him a household name at the end of the year.

The name of the special has been titled, “The Time of the Doctor” which let’s be honest, the writers missed the boat with things like “Silent Night” or “The Twelfth Hour” unless all these “The ______ of the Doctor” titles are some kind of pattern that fans should be keeping an eye out for.

BBC America released the following blurb about the episode alongside the trailer:

On the heels of Matt Smith’s final episode as the eleventh Doctor, BBC AMERICA is releasing the latest epic trailer from the December 25th Christmas Special, “The Time of the Doctor.” Orbiting a quiet backwater planet, the massed forces of the universe’s deadliest species gather, drawn to a mysterious message that echoes out to the stars. And amongst them — the Doctor. Rescuing Clara from a family Christmas dinner, the Time Lord and his best friend must learn what this enigmatic signal means for his own fate and that of the universe.

Doctor Who: The Time of the Doctor airs at 9:00 P.M. Christmas day on BBC America. 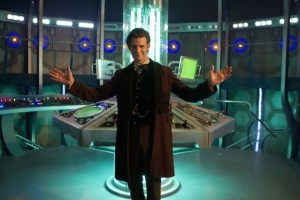 UPDATE: The Official Doctor Who Twitter has in fact confirmed that the identity of the Twelfth Doctor will in deed be revealed this Sunday on BBC1 at 7 p.m. UK time/2 p.m. EST. 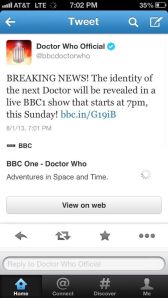 It was probably the statement heard ’round the world when current star of the long-running BBC show Doctor Who, Matt Smith announced that his last trip in the iconic blue box would be the show’s yearly Christmas special.

Throughout the month since Smith announced his exit, fans have been trying to figure out just who would be filling the role. Some had the idea that it might be a woman, some were hoping for some high profiled actors and others just wanted the Doctor to finally be ginger.

Last week, the official Doctor Who website released snippets of a script that the actors being auditioned had to read, but other than that, there was no other information given. A line in the script has the Doctor asking his current companion, Clara (played by Jenna Coleman) if she was always a certain height.

Today, Bleeding Cool the same people who said the missing episodes from the beginning of the series had been found in Africa, have posted that the BBC might have found their Twelfth Doctor and will be releasing the news via television at 7 p.m. this Sunday night. During a live show being hosted by Zoe Hall, series writer Steven Moffat and current star, Smith will introduce the person who will be putting on the now famous bow-tie or fez for the next couple of seasons.

Until now, casting was supposedly done under the code name Whodini and even those working with the Twelfth Doctor were unaware that they were working on this mission. As of right now, the BBC hasn’t commented on the matter but it does seem that Moffat will make an announcement at midnight.

So now the question is, who is the bloody new Doctor? Anyone have any guesses or suggestions on the matter? 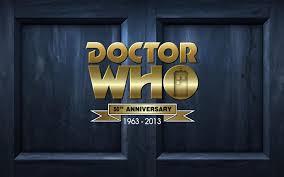 The 50th anniversary Doctor Who trailer has finally made its way online. The video which can be seen in 2D or 3D doesn’t give away any of the plot, but does reveal to Whovians among us David Tennant and Matt Smith in the same exact scene!

Cue all the fangirl cries and screams.

Even if this is just a trick to make the Whovians excited and then tear them down then it doesn’t really matter. Just the sheer though that the trailer could be hitting the web anytime soon is enough to get their blood pumping. Anyways, you can see the trailer below and let us know if you think it’s the real thing or just a trick?