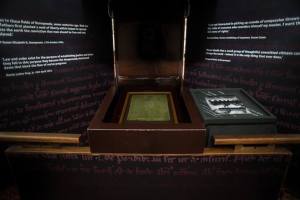 Call it great publicity or just a bad move, but Jay-Z has revealed the album art for his upcoming new album, Magna Carta Holy Grail and the same exact place where four of the last remaining versions of the Magna Carta are being house. You know, because he is Jay-Z and he can do whatever he wants whenever her wants.

The rapper revealed on his Life + Times page, a photo of his album art just sitting next to the Magna Carta which is currently housed at Britain’s Salisbury Cathedral. But just when you thought that it was just for some kind of publicity, came word that the album could be seen by fans m inside the cathedral until the end of July.

Viewings will take place in the Chapter House at Salisbury Cathedral from 9.30am to 4.30pm Monday-Saturday and 12.45pm to 3.45pm on Sundays.

The Dean of Salisbury, the Very Revd June Osborne released a statement saying:

“We are delighted that Jay-Z has chosen Salisbury Cathedral, home to the finest of the four surviving original copies of the Magna Carta, as the location for the global premiere of his artwork for ‘Magna Carta… Holy Grail’. We know how important Magna Carta, and all it represents, is to people across the globe. The ideals it embodies are still relevant today. Jay-Z, through his album, is creating a huge awareness of this historic document and its modern significance to a huge audience in the run up to its 800th anniversary in 2015. We hope to welcome many of his fans here this summer to see the artwork in the Chapter House alongside our Magna Carta.”

The Magna Carta Holy Grail will be released tomorrow for those who downloaded his Samsung app. The album will also feature a laundry list of guest stars such as Rick Ross, Frank Ocean, Beyoncé and Justin Timberlake.