The other day we got the full list of nominees for this year’s Billboard Music Awards and now, some of the performers for the show have been revealed.

Previously, it was announced that Jason Derulo, who broke the news about the nominees on Good Morning America a few days ago, would be performing on the award show. Also joining the “Talk Dirty to Me” singer will be Luke Bryan, John Legend, OneRepublic and Imagine Dragons.

The Las Vegas-based band are tied with Lorde for the most nominations at this year’s event that is scheduled to take place on Sunday, May 18 at the MGM Grand Garden Arena in Las Vegas on ABC at 8 p.m. ET.

John Legend is up for one award this year, the Milestone Award while OneRepublic comes in with two nominations for “Top Duo/Group” and “Top Digital Song” for their hit “Counting Stars.” 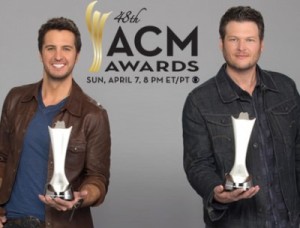 For fans of country music, tonight will be another night full of rocking country songs and awards for the best of the best in that genre of music.

The Voice judge (and sometimes country singer, I kid) Blake Shelton and first time co-host, Luke Bryan will be taking the reigns as hosts of the evening. Performers will include, Hunter Hayes with Stevie Wonder, Tim McGraw, Taylor Swift with Keith Urban, George Strait, Garth Brooks and even a collaboration between John Mayer and Brad Paisley.

While the laundry list of performers is enough for a country fan to tune in, the list of presenters aren’t that far off either. Presenters include, Gary Allan, Faith Hill, Shania Twain, Trisha Yearwood, Chris Young, Eli Young Band and many more.

For the full list of performers and presenters, tune in tonight at 8 p.m. on CBS for the live airing of the show on the east coast and a tape delay for those on the west coast.

And for those that can’t see it at all, click here at 8 for the live stream of the show.