With their Reflektor Tapes documentary set to be officially released next week, the Arcade Fire has unveiled that they will be dropping a new 7-inch record to coincide with the documentary’s release. The record will feature previously unreleased tracks that did not make it onto the Canadian group’s last album, Reflektor. The songs to be featured on the LP will be “Get Right” and “Crucified Again.”

While the two songs did not make it onto the much regarded record, it hasn’t stopped the band from performing the songs live. On YouTube, there are several audio posts of the band performing both tracks live, though at different events. The vinyl release of the two songs will be the first time high-quality versions of the songs will be available to the public. Listen/watch some of the live performances below.

The Arcade Fire’s documentary, The Reflektor Tapes is set to be released in the United States on Sept. 24 while the film made its official debut last weekend during the Toronto International Film Festival. The documentary follows the band as they record their 2013 album, Reflektor. The 7-inch will reportedly be released later this month.

Eminem might have had one of the most awkward interviews of this year when he appeared on ESPN to discuss how his new single, “Berzerk” was to become the song of the NFL season yesterday, but today, Slim Shady went ahead and gave fans the official music video for the first single.

After a week of dropping hints and teasers for the video, it was finally released and yes, there are some berzerk things going on. The video features random video clips inserted between some performance shots as well as several product placements for Eminem’s buddy, Dr. Dre (you know, his super cool, super expensive Beats by Dre).

But before we go any further, there are also several special cameos in the video to leave you scratching your heading and going huh? Don’t worry, we won’t ruin the surprise, so click below and check out the video.

“Berzerk” is the first official single from the MC’s upcoming LP, The Marshall Mathers LP 2 which is scheduled to hit stores on November 5th and will also be played at the most random moments during this year’s NFL games.

You can also see the “awkward” interview from this weekend here: 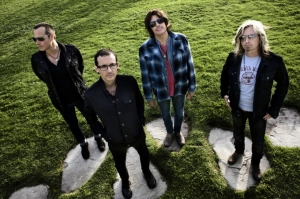 There might still be a lot of bad blood between the remaining members of Stone Temple Pilots and former frontman, Scott Weiland but that doesn’t mean that the band won;t be going forward with putting out a new album anytime soon.

Today it was announced that the newly revamped Stone Temple Pilots, featuring new frontman, Linkin Park’s Chester Bennington, will indeed be recording a new LP. The LP which has been titled, High Rise is set to be released on October 8 will feature five new songs including the first post-Weiland single, “Out of Time.”

It might seem like relatively recent that Weiland was given his walking papers from the group, but it has actually been six months since then. While he did seem particularly upset and even admitted last week that the other members would have to buy him out of the group, Weiland hasn’t been doing too shabby, going out on his own tour while everything was falling apart.

“It was a quality-of-life decision and that really what it’s about,” bassist Robert DeLeo said in a radio interview, according to Blabbermouth. “That’s where we wanted to be. Chester is a person that’s really surrounded by good fortune and that’s something you want to be around. It’s no longer three guys in a room, trying to make a record or trying to get a tour together — it’s four guys in a room.”

We all know that the story of STP won’t be ending anytime soon, especially if the legal war keeps on, but at least they have a new album and a tour with Filter to keep them occupy. STP and Filter will be heading out on tour starting on September 4 in Bethlehem, Pennsylvania; full tour dates can be seen below.