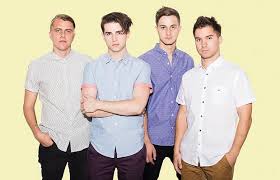 The Downtown Fiction haven’t released a full new album with new tracks in sometime and it was beginning to look like they had fallen off the face of the Earth, but the band have returned with some good news for fans; there’s a new album on the way.

The band took to their Facebook page to reveal the news of the new album as well as the title for it which is, Losers & Kings. In the post, they also describe the new album as a  record that “celebrates the chaotic beauty and loneliness of life, our dreams and journeys, confusion and euphoria. It’s about acceptance of yourself and others.”

The album will be released through the band new record label, Fearless who they signed to just last September after ending their relationship with Atlantic Records.

The new record isn’t the only good news that has come from the band in the last few weeks. Last week, You me at Six had revealed that The Downtown Fiction would actually be taking on the role of supporting acts during their upcoming North American tour which is scheduled to begin on April 21 at the Troubador in Los Angeles.

The track list for Losers & Kings can be seen below as can the full tour dates for the You Me at Six tour.

YOU ME AT SIX Tour feat. THE DOWNTOWN FICTION: