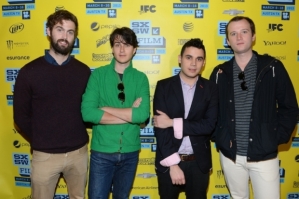 Turns out that this weekend’s Easter Parade march featuring Vampire Weekend and Steve Buscemi did have some ulterior motive. The band have announced today that they will be hosting a livestream of their performance at New York City’s Roseland Ballroom on April 28, as part of the American Express Unstaged series and Buscemi will be directing it.

Bassist Chris Baio originally reached out to the Boardwalk Empire star when he found out that they were in fact distant cousin while retracing his family tree. When he found out, the band posted on their Twitter this tid-bit of information also confirming that Buscemi was excited about the idea.

Baio said the following to Rolling Stone Magazine in an interview:

“He really is a great director. Growing up, I was a huge “Sopranos” fan and one of my favorite episodes is “The Pine Barrens”, which he directed. Also, I just realized this morning he directed the ‘Leap Day” episode of “30 Rock” last year; that’s one of my favorites. I feel safe in his hands.”

This New York performance will be the group’s first performance in two and a half years and will feature some of their new tracks from their upcoming album, Modern Vampires of the City. Buscemi will also be recording some bonus documentary footage of the show while at it.

Until then, relive the randomness that is Steve Buscemi singing “Diane Young” through a megaphone with the band members just hanging around.

Modern Vampires of the City is set to be released on May 14 through XL Recordings.