Florence and the Machine, The Strokes, and the 1975 are just some of the artists who will make their way to New York during the last weekend in May for the 2019 edition of the Governors Ball. On Monday (Jan. 7), Founder Entertainment announced the full roster for the ninth annual summertime event.

In addition to the aforementioned acts, the lineup boosts performances by be Tyler, the Creator, SZA, Nas, Blood Orange, Kacey Musgraves, Lily Allen, Major Lazer, Brockhampton, Lil Wayne, Vince Staples, Bazzi, Charli XCX, Dreamers, and more. In total, over 60 artists will take over one of four stages during the weekend-long music festival.

In addition to the diverse roster of acts, Governors Ball will also include a robust number of gourmet food options from different establishments from around New York City, craft beer and cocktails as well as surprise pop up performances, lawn games, street art and a 21+ Best Kept Secret area.

Three-day general admission and VIP tickets are currently available on the music festival’s website with a special “Announce Day” pricing until 11:59:59 p.m. EST. After that, regular pricing will begin. For those feeling a little strapped for cash following the holiday season, there’s no need to worry because Governors Ball is offering payment plan options.

For those who purchase passes today, a special 2019 collectible charger can be added to your order, because one can never have too many chargers especially at a music festival.

Governors Ball 2019 will return to its longtime home of Randall’s Islands Park during the weekend of May 31 – June 2. The full lineup for this year’s event can be found below. 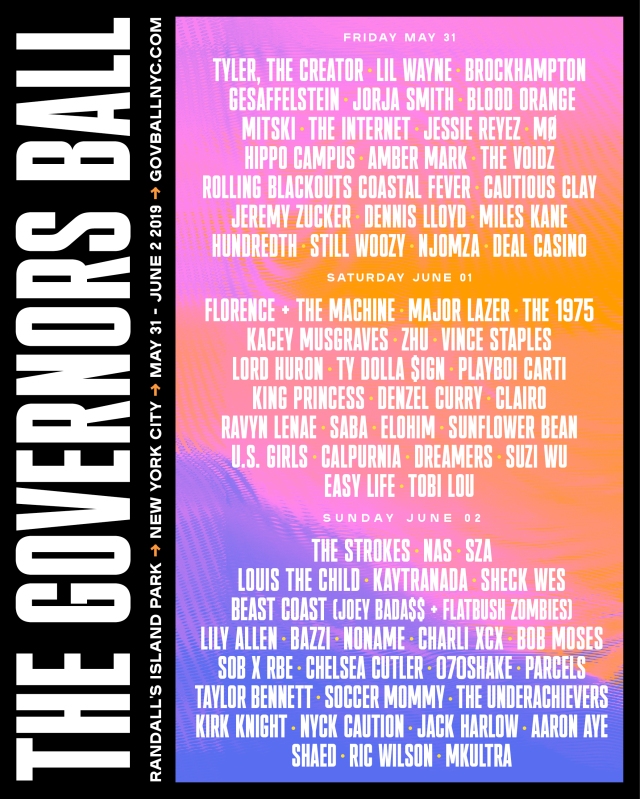 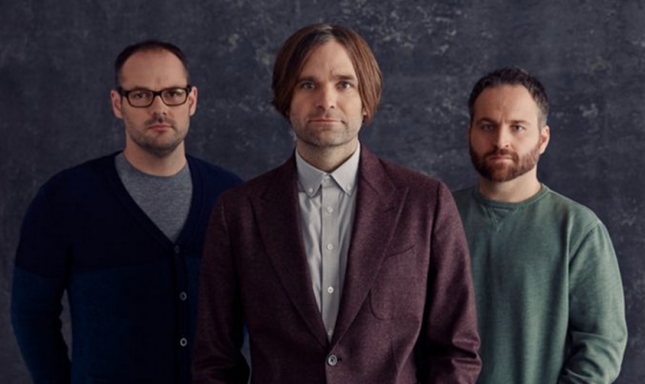 While the vast majority of the world were probably sitting back in awe and giving props to Jay-Z  and his friends when he announced the launch of his new music streaming service, TIDAL, there were some artists who were not too impressed by it.

In a recent interview with The Daily Beast, Mumford & Sons frontman, Marcus Mumford said that they wouldn’t have joined the streaming site due to its “bias towards only popular artists.” For those who didn’t see the launch last month, Jay-Z announced the service on stage, alongside the likes of Kanye West, Madonna, Beyoncé, Rihanna, Arcade Fire, Jack White, Daft Punk and more.

While British firecracker, Lily Allen mirrored the sentiments by sending out many tweets saying: “I love Jay Z so much, but TIDAL is [so] expensive compared to other perfectly good streaming services… He’s taken the biggest artists & made them exclusive to TIDAL… people are going to swarm back to pirate sites in droves sending traffic to torrent sites.”

The most recent person to join the anti-TIDAL campaign is Death Cab for Cutie frontman Ben Gibbard.

Gibbard who like Mumford was being interviewed by The Daily Beast (unrelated interviews),told the publication just want he thought about the new service.

“If I had been Jay-Z, I would have brought out ten artists that were underground or independent and said, ‘These are the people who are struggling to make a living in today’s music industry. Whereas this competitor streaming site pays this person 15 cents for X amount of streams, that same amount of streams on my site, on TIDAL, will pay that artist this much.’ I think they totally blew it by bringing out a bunch of millionaires and billionaires and propping them up onstage and then having them all complain about not being paid,” said Gibbard.

“There was a wonderful opportunity squandered to highlight what this service would mean for artists who are struggling and to make a plea to people’s hearts and pocketbooks to pay a little more for this service that was going to pay these artists a more reasonable rate. And they didn’t do it. That’s why this thing is going to fail miserably.”

The Verge also point out in an article, that Jay-Z and TIDAL might have a secret weapon under their puffy jackets; Live Nation. 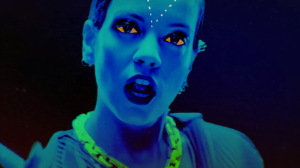 After the title track from her upcoming new album had been leaked earlier in the day, Lily Allen has gone ahead and premiered the music video for it

“Sheezus” marks the fourth video that has been released from the British singer’s new album which is set to hit shelves on May 5 through Regal Records.

If you though that “Air Balloon” meant a nicer Allen was on the horizon with the upcoming record, all you need to do is think back at the fact that such a stink was started over her first single, “Hard Out Here.” In the song, she goes ahead and name drops some of pop’s biggest star such as Beyoncé, Katy Perry, Lady Gaga, Rihanna and Lorde claiming that none of them can sit back and let another take the number one spot on the charts.

Of course they can’t sit back and let some other pop star claim that title spot, Lily; the record labels won’t allow that! You know that.

Oh yeah, there’s also a bit where she talks about periods.

Check out the video below for the song which features Allen dressed up like a rapper in a hoodie with black lights in something that feels very reminiscent to something that MTV would have played back in the 90s. 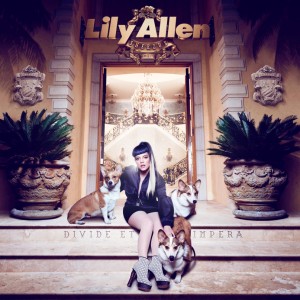 Lily Allen had a busy weekend beginning with having to defend comments she made in a recent interview published in Shortlist titled “Feminism.” In the article she reveals that the word feminism shouldn’t exist and that men aren’t the real enemy of women; women are.

But while the article did go on to spark a lot of readers, Allen had the final laugh because today she revealed the album art, track list and newest music video for her upcoming album and all those people still have her name in mind.

The album which Allen revealed to be named Sheezus after a guest appearance on The Graham Norton Show is reportedly set to be released on May 6. The cover art features the British singer sitting on steps in front of a beautiful mansion surrounded by three corgis. On the steps are the words “Divide Et Impera” (divide and rule) carved onto them.

As for the newly released track, it’s titled “Our Time” while the music video features the pop star playing different roles and having a good time on the town. The video for the track can be seen below as well as the track list for the upcoming record. 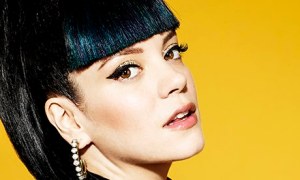 Lily Allen has already released two songs from her upcoming album without so much as a hint to what the album would be titled. With one song speaking out against the way the world treats women and other one that’s more dreamy, it would be a little hard to decipher what might be the titled.

Today, the British spitfire revealed that the name of her album would be Sheezus; a little nudge to Kanye West’s 2013 album, Yeezus.

The songstress revealed the news during a stop at British late night show, The Graham Norton Show. “It’s a confident title choice…and a little nod to Kanye West,” she explained about going that route of titling the album. The show which Allen appears on, alongside Fleming star (or Papa Tony Stark, if you will) Dominic Cooper will air tonight on BBC1.

Sheezus is Allen’s first new album since she signed with Warner Brothers last year, but still, no official release date has been given for the new material. Her last album was 2008’s It’s Not Me, It’s You and she recently revealed that she will have a song featured on the Girls soundtrack. 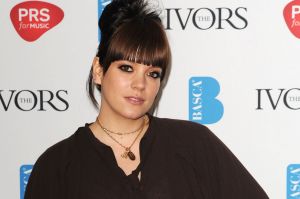 Last month, Lily Allen released another new track from her upcoming new album. The song is her synthy-pop laced song “Air Balloon” where she drops names of rock icons such as Kurt Cobain and Elvis Presley while ate the same time calling out her haters out there; you know the ones that accused her of being a racist because of the music video for “Hard Out Here”?

Unlike “Hard Out Here,” the video is more like a breath of fresh air with Allen beginning the video in South Africa frolicking with butterflies and a zebra and some random rednecks just hanging on a couch. Eventually we find her floating in outer space like Sandra Bullock in Gravity. 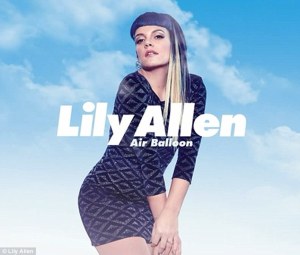 Lily Allen is back with a brand new video for another new song of hers, “Air Balloon.”

Unlike her previously released song, “Hard out Here” which resulted people up in arms accusing the spitfire of being racist, this new song takes more of a chirpy route. With its synth-pop laced rhythm and the name dropping of classic rock stars like Kurt Cobain and Elvis Presley, it’s still doesn’t meant hat she’s not calling out anyone. In this song, she addresses the haters with “and we can’t hear what they say/ Up in my air balloon.”

Check out the audio for the new song here.

“Air Balloon” along with “Hard Out Here” will be featured on Allen’s upcoming new album which has yet to be given an official titled or a release date, but the year is young.

Lily Allen is known for telling it how it is and not giving a care in the world when people act shocked that she would say such a thing. Remember how last month people were up in arms when she released the music video for her first new song since she started a family, “Hard Out Here”?

Last week, our favorite little spitfire was back, but toned it down a little bit to perform at a London benefit for Kids Company dubbed “Under 1 Roof” which also featured many artists. Allen went on to perform Ella Fitzgerald’s “Dream a Little Dream of Me” with Robbie Williams as well as “Somewhere Only We Know” with Keane frontman, Tim Rice-Oxley.

Also making the list of songs she performed, Allen also did her own song, “The Fear” accompanied by Coldplay frontman, Chris Martin which can be seen down below.

You see, just because you call people (and industries) out doesn’t mean that you don’t have a soft side.

“THE FEAR” WITH CHRIS MARTIN

“SOMEWHERE ONLY WE KNOW” WITH TIM RICE-OXLEY 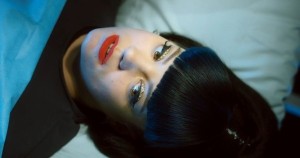 Our favorite little British spitfire, Lily Allen is back with a brand new single. After playing around with fans this morning tweeting things with a hashtag of #HOH, we finally figured out what it meant; it was the initials for the title of her new song.

The song which is named “Hard Out Here” is the singer’s first new song since 2010 when she decided to take a break from the music industry to start a family. A few weeks ago, she was already starting to make her way back into the music world; last weeks she released a cover of Keane’s hit song, “Somewhere Only We Know” as part of a commercial for John Lewis department stores in Great Britain. At the time, the song was already available for purchase in the U.K. and new has become available, globally.

The video is a little on the NSFW as we watch Allen get some liposuction with a suited executive trying to get someone to have her on their late night show and dancing around with a mess of scantily dressed dancers and all that good stuff we see on “music” channels now a days. Pretty much, it’s “hard out here for a bitch.”