Rancid, Pennywise, and Suicidal Tendencies are some of the acts who will headline the first ever The Bash Music and Beer Festival this spring. On Tuesday (Feb. 19), festival organizers announced the rocking roster for the inaugural event as well as a mini-tour itinerary for the festival throughout May and June.

Joining the aforementioned acts on the bill are L7, the Mighty Mighty Bosstones, H20, Madball, Noi!se, and Sharp Shock. The upcoming music festival is a joint venture between the Rancid guys, Synergy Global Entertainment, Inc., and Brew Ha Ha Productions.

The lineup for the first annual event was specially curated by the members of Rancid.

“I’m looking forward to playing with some of my favorite bands in the world. Pennywise, Suicidal Tendencies, L7, and more. We look forward to seeing everyone out at the Bash,” Tim Armstrong of Rancid says in a press statement.

“I am a massive fan of these bands, and the chance to launch this event with Rancid is really exciting for SGE,” John Reese, CEO of Synergy Global Entertainment and co-producer of The Bash adds.

“The band has been so engaged in developing this special series of shows, and it shows how much they care about their fans.”

In addition to the music-centric list, the music festival also boasts a huge lineup of breweries. Each date of the Bash will host craft beer tastings (for those who are 21+) from some of the best breweries in the country. The lineup of breweries will include tons of local favorites as well as well-known breweries. In total, attendees who are 21+ can sample from a selection of over 100 different craft beers.

The Bash begins its mini-tour on May 11 at the Margaret T. Hance Park in Phoenix and includes a total of seven stops in May and June. The traveling festival’s itinerary includes stops in Tucson (May 12); Englishtown, New Jersey (June 2); Boise (June 8); Tacoma (June 9); San Jose, California (June 15); and Sacramento (June 16).

For more information about the Bash, head on over to the festival’s website. 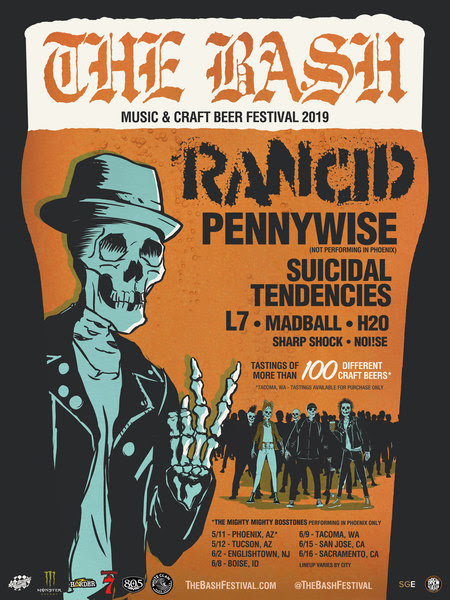