It looks like Ben Gibbard’s marathon injury which he sustained over the weekend, isn’t going to stand in the way of Death Cab for Cutie’s tour after all.

The band, who announced a big Spring into Summer tour last month, have now extended those dates to include even more stops at some big venues in September and October of this year. Death Cab’s first part of the tour will begin at Quail Run Park in Mesa, AZ and wrap up on July 15 at Morrison, CO’s Red Rocks Amphitheatre. Some European dates have also been sprinkled in between those North American stops.

After taking a month and a half off (or so it appear), they will pick things right back up on Sept. 11 at Boston’s Blue Hills Bank Pavilion.

Check out the newly revised tour dates below.

In addition to the tour dates, the band have released the official music video for the first single, “Black Sun” which can be seen below.

“Black Sun will be featured on Death Cab for Cuties eighth studio album, Kintsugi, due to be released on March 31.

How about this for a major OUCH?

Over the weekend, Death Cab for Cutie frontman Ben Gibbard broke his wrist while participating in a 50K. If you’re wondering just how the singer managed to break his wrist while running, it seems to have been a misfortune event.

Gibbard, who had become known for being a runner, posted a photo of himself with a sad face and a cast around his wrist. In the caption that accompanies the photo on the social media site, he explains how around mile marker 20 of the course, he slid on a super slick bridge and went down resulting in a broken wrist.

But all is not lost. In the post he remains optimistic when he says that it will heal and he will be back as soon as it does.

Considering that it is a serious injury, there has been no word on whether this will affect the band’s touring schedule. As of now, it appears their upcoming tour will still begin on April 10 in Arizona, but we’re sure Gibbard and the rest of the band will keep the fans updated in the event that his injury gets in the way of touring.

Those upcoming 2015 tour dates can be seen here.

Kintsugi, the band’s upcoming new album, will be released on March 31 through Atlantic Records.

Last week, footage of Death Cab for Cutie playing two new songs from their upcoming record surfaced online and now, a week or so later, the band have released the lyric video for the first single off of the group’s eighth studio record, Kintsugi.

The lead single is a song titled “Black Sun” which can be heard below.

As if a new song wasn’t enough, the band also announced they will be heading out on tour later this year.

The tour will begin on April 10 in Mesa, AZ at Quail Run Park and hit up several cities across North America as well as a handful of dates in Europe, before wrapping up on July 12 at the Hollywood Bowl in Hollywood.

For those concerned about who will fill in for former guitarist Chris Walla, who left the group, officially, at the end of last year, the band have confirmed that touring members Dave Depper and Zac Rae will fill the void during the tour.

Kintsugi will be released on March 31 through Atlantic Records while the full itinerary for the upcoming tour can be seen below. 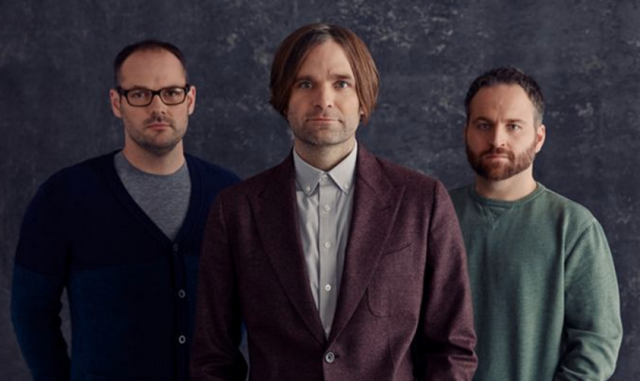 Back in August, Death Cab for Cutie revealed that founding member and guitarist Chris Walla has decided to leave the band once their slew of festival dates had concluded.

The only silver-lining to Walla’s departure announcement was that the band revealed they had been working on a new album in the meantime; the follow-up to 2011’s Codes and Keys. At the time, the only information given was that it would be released sometime in 2015 with a lot of tour dates to follow.

Today, the band not only revealed the album title, but also the release date for their eighth studio record. Kintsugi will be released on March 31 through Atlantic Records.

When asked about the album’s title, bassist Nick Harmer said that it’s a “Japanese style of art where they take fractured, broken ceramics and put them back together with very obvious, real gold. It’s making the repair of an object a visual part of its history.”

If you’re thinking this is a tribute to the “fractured” band line-up due to the departure of Walla, then you might be onto something as confirmed by DCFC frontman, Ben Gibbard.

“This is an opportunity for the band to become something it could only become by losing a founding member. It’s our goal to make records that rank amongst the best work we’ve ever done.

I completely respect and understand why people love Transatlanticism or We Have the Facts… or Narrow Stairs. And I would hope that as we move forward, people listen with as little prejudice as they can and try to hear the music for what it is and not what they want it to be.”

While the band appears to have moved on since Walla’s official final show and departure, there has been no indication if they have brought in someone to fill in for him.

For now, check out the cover art and track list for the new album below.