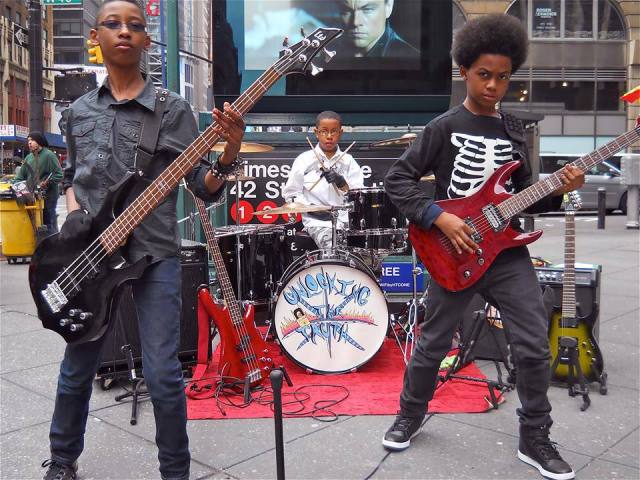 Remember in your middle school days when you and your friends formed a crappy garage band just for the fun and imagining getting signed to a record label?

Well, it looks like some middle school garage band is living the dream, Over the weekend, news broke about Sony Records signing a heavy metal band made of 8th graders. The best part? The fact that they will reportedly make $1.7 million off of this signing.

The group which is named Unlocking the Truth is made up of three Brooklyn kids, who haven’t even begun puberty yet. Bassist Alec Atkins and guitarist Malcolm Brickhouse are 13 years old while drummer Jarad Dawkins is 12 years old. When we were 12 years old, we were trying to stop sniffing glue.

The trio got their start performing around Time Square which led to their big break with Sony signing them for a guaranteed two albums with the option to go forward with four more. The deal secures $60,000 up-front for the hardcore teens/tween first LP with a possible $350,000 advance for their second record.

If they chose to go forward with the six albums, Sony is willing to shell out the reported $1.7 million. Since the boys are completely underaged, the Manhattan Supreme Court had to approve the deal, which they did (of course).

According to the NY Daily News, the group was discovered in 2012 by Steve Jordan, Eric Clapton’s drummer while they were performing in Washington Square Park. This, reportedly, led to them opening for Guns ‘N’ Roses, a gig with Queens of the Stone Age next weekend, an opening slot on Coachella’s main stage and even a spot on the Vans Warped Tour.

Dawkins’ mother revealed that the trio also have a book deal from Penguin and will be filming a documentary about their rise.

We all know that it’s not easy to cover songs from big artists. Believe us, we’ve had our fair share of listening to less than stellar covers of some hit tracks.

Yesterday afternoon, a video of four kids attempting to cover Weezer’s song, “Undone” went viral when not even 30 seconds in, thing start to go downhill, or like majority of the puns on the web, “the cover starts to come undone.”

The best part about the flop making its way onto the internet? The fact that Weezer frontman, Rivers Cuomo actually tweeted that he wants the kids on stage with him, next time they perform in a town near them. The jury is still out on whether Cuomo was serious or just messing around, but that would be cool for those four kids.

Let's get this kid to perform with us next time we're in his town:) @Doctortriplej https://t.co/0hd0XHB2Rv … Great keyboard skills

Check out the minute-long video below and give the four guys credit for not only letting this get posted online, but also for the fact that they have killer music taste.

It’s been nine years since Phil Collins has performed “In the Air Tonight,” but armed with an unusual band, the singer not only performed his signature solo song, but he also performed Genesis’ “Land of Confusion.”

Last week, Collins appeared at Miami Country Day School where audience members’ were thrown from a loop when they saw the musician take the stage. But while it might seem like a strange way to begin as comeback, it’s a lot more than what was being done before.

Collins has been away from the spotlight for some time with his last album of original material, 2002’s Testify, being released 12 years ago while his last major live performance taking place in 2010 while promoting his Motown covers album, Going Back.

While in 2012 he discretely said he would be putting music on the back burner, while promoting the Tarzan musical in Germany, he revealed a change. “I have started thinking about doing new stuff,” he said. “Maybe playing some shows again, even with Genesis. Everything is possible. We could tour in Australia and South America. We haven’t been there yet.

Just this past January, he revealed to a Florida magazine that he had already begun writing new music with chart-topper Adele.I’ve just started to work with Adele,” he said. “I wasn’t actually too aware…I live in a cave, but she’s achieved an incredible amount. I really love her voice. I love some of this stuff she’s done, too.”

So far, no other information has been given about the Adele project or if a new album will be in his immediate future, but for now, you can watch Collins being backed by his band of youngsters.

The Life is Good Festival, a family friendly festival which helps support all types of causes has revealed its line up for this year’s festivities.

Leading the line up are Jack Johnson,  Daryl Hall & John Oates and from the Nickelodeon hit show, Yo Gabba Gabba!

This year, the organizers expect over 30,000 fundraisers to show up and are hoping to raise over $1 million for the Life is Good Kids Foundation. The organizers behind such huge festival as Bonnaroo and Outside Lands fests, have teamed up to bring this charity-minded festival to life. The festival will host three stages, art activities and several kids’ areas; everything a parent could ask for.

A statement released by the organizers stress that the main point of the festival is to create a community of fundraisers while also having great music.

Those who purchase tickets, will be  directed to a personal fundraising page, where they can raise sums for the foundation. Each festival-goer that raise $500 or more will be labeled “Very Good People” or “VGP” and will be rewarded with backstage hospitality, preferred viewing vantage points, meet-and-greets with the artists and other incentives to continue raising funds.

To purchase tickets you can head on over to the festival’s website here and have fun for a good cause.

Kids Acts – Both Days
Yo Gabba Gabba!
Recess Monkey
Josh and The Jamtones

Soon-to-be papa Josh Duhamel knows how to get kids to laugh. The actor will be hosting this year’s Kids’ Choice Awards on Nickelodeon where the kids get to choose who wins which category and goes home with the iconic, neon orange blimp award.

In the new trailer for the show, the Safe Haven star dresses up as many of the nominees for the awards including Taylor Swift from her video for “We Are Never Getting Back Together”, One Direction from their “What Makes You Beautiful” video, Carly Rae Jepsen and the infectious Psy doing the “Gangnam Style” dance.

You can watch the video right here:

Let’s all agree that his and Fergie’s baby will have a lot of talent.

The Kids’ Choice Awards will be airing live on March 23 starting at 8 PM on Nickelodeon.