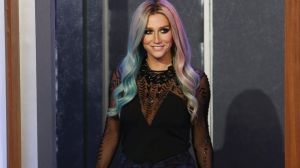 In case you haven’t already heard, Ke$ha checked out of rehab late last week and it looks like it might be the start of something new.

At the beginning of January, the pop star checked into a rehab facility in Chicago to help her with an eating disorder that had plagued her. At the time, she was only supposed to be in the facility for one month, but decided to stick around for an extra month, just in case.

Upon checking out of the center, she took to Twitter to change her handle from @Keshasuxx to @KeshaRose, cutting all ties to the dollar sign, probably a statement on starting all over again with a fresh mind.

“Happy to be back! Feeling healthy & working on tons of new music🐱,” the pop singer tweeted on Wednesday night, breaking the silence on her social media account, though close friends took to it last month to reveal that she was doing great in rehab.  “I can’t thank my fans enough for all the love & support u have given me❤️️”

The “Timber” singer originally checked into the Timberline Knolls Residential Treatment Center on January 3 to help treat her ongoing issue with Bulimia as well as to help her “learn to love herself again.”

“I’m a crusader for being yourself and loving yourself, but I’ve found it hard to practice,” she released in a statement right before going into isolation. “I’ll be unavailable for the next 30 days, seeking treatment for my eating disorder … to learn to love myself again, exactly as I am.”

It’s good to have her back and like the sweater she wore when she left the facility said, she’s indeed a survivor.

When Ke$ha had revealed that she was going into rehab, fans of the pop star were concerned and a little surprise by the news that came out of nowhere at the beginning of the month.

A close friend of the pop star’s took to her official Twitter to thanks fans on behalf of Ke$ha, who is currently at the rehab facility voided of all types of internet access. On the social media page, the friend wrote the following to her 3.53 million followers.

“This is Kesha’s friend. She asked me to tweet an update for her because she doesn’t have access to twitter right now. she says “THANK YOU. SOOO MUCH. I’m overwhelmed to tears by all of the love, letters, and support!! I’ll be back soon and better than ever. ohhh and she can’t believe Timber is still number one! “Fck YEAH animals! PARTY ON!!!!”

Pepe Sebert, the singer’s mother revealed that the tipping point in her daughter’s eating disorder was when her longtime producer, Dr. Luke allegedly called her a “fucking refrigerator” and urged her to lose a lot of weight following sometime off from tour.

“I’m a crusader for being yourself and loving yourself, but I’ve found it hard to practice. I’ll be unavailable for the next 30 days, seeking treatment for my eating disorder… to learn to love myself again, exactly as I am,” Ke$ha said in a statement after being admitted to Timberline Knolls Residential Treatment Center.

Following her daughter’s check into the Knolls Treatment Center, Pepe Sebert, Ke$ha’s mother, followed in suit and admitted herself into the same facility for post-traumatic stress disorder.

From “Timber” to time-out?

It has been confirmed thatKe$ha has been checked into to a rehabilitation facility due to an eating disorder. Sources close to the pop star say that she is currently at Timberline Knolls near Chicago, the same place Demi Lovato checked into for a year when she was in the midst of battling her own personal issues.

“I’m a crusader for being yourself and loving yourself, but I’ve found it hard to practice. I’ll be unavailable for the next 30 days, seeking treatment for my eating disorder … to learn to love myself again, exactly as I am,” the 26-year-old singer shared with TMZ about her decision to check herself into the center.

Friends of the star say that the tipping point was around Thanksgiving when they started to notice her smaller figure during the holiday season. They all spoke with her about it and that’s when it all came out. Those friends reportedly told TMZ that the star blamed longtime producer, Dr. Luke for her eating disorder.

According to them, following her “Get Sleazy” Tour, the producer kept harping her about the weight she had gained during her downtime from the studio and tour. He began to call her fat and urged her management team to do something about it. Those friends say that things started to get worse during a music video shoot where the producer said the singer “looks like a f***ing refrigerator.”

Here’s to hoping that she gets better fast because who doesn’t love our favorite garbage-bag-wearing, glitter-throwing party girl.

Once you’ve gone on national television on your reality television show and revealed that you’ve had sex with a ghost or drank your own pee on camera, there really isn’t much more you can do to make people’s jaws drop to the floor.

For Ke$ha, being called a “crack whore” and all those lovely nicknames is just a normal day for the singer. In her directorial debut for her new music video, “Dirty Love,” she keeps up her party girl persona by playing a stripper.

In the video, she rocks garter belts, her now signature rainbow-colored hair and goes about writhing around on the floor. But that’s not all; she also gets doused in champagne which she spits at the camera and her fellow dancers in this grainy, almost sex tape like video.

“Death by glitter. hope u like it,” she wrote about her directorial debut on YouTube, adding that the song is her favorite off her Warrior album.

Oh Ke$ha, what are we going to do with you. Anyways, the video can been seen below and some warning ahead of time, the video’s a little NSFW.

Pitbull did a decent job this past Sunday at the American Music Awards while he took over the role of host of the evening. The Cuban rapper even took the stage to perform his new song, “Timber” which featured our favorite party girl, Ke$ha.

While the song has been floating around the internet for over a month, the video has finally surfaced. The rapper gave some of his fans on Facebook the exclusive first look at the video this past Sunday, in honor of him getting the chance to host the yearly, fan-voted award show

The video was filmed in Pitbull playground also known as South Florida (we should probably insert some “305” and dale in here, but we know how annoying that is, dale) including the saloon where Ke$ha’s part mostly takes place (except those parts when she’s with animals, coincidence, we think not) and Pitbull sticks to what he knows best, the beach.

Now who’s ready to watch some Coyote Ugly or Dukes of Hazard?

Anyways, check out the video for the track below:

“Timber” is the first single off Pitbull’s new EP, Global Warming: Meltdown which was released yesterday.

Those looking forward to seeing Pitbull and Ke$ha in Australia might have to take a rain check on the shows because it looks like the plug has been pulled.

The two radio mainstays had been scheduled to have a tour in Australia that was scheduled to begin on October 30; now it has surfaced that the tour has been completely scrapped a little over two weeks from when it was supposed to begin.

The show was coined as the year’s “hottest double-act,” but it looks like the reception was a little on the luke-warm side of things.  The dates for the “Pitbull & Ke$ha – Live In Australia” tour included  Melbourne’s Rod Laver Arena (Nov. 1), Adelaide Entertainment Centre (Nov. 3), Perth Arena (Nov. 5) and wrap-up at Sydney’s Allphones Arena (Nov. 8).

The promoters for the event,  Dainty Group, confirmed the run was off, but the official reason for it has yet to be released. Some are starting to guess that it might have to do with the fact that ticket sales for the show had been mediocre at best.

Pitbull did take to his Facebook page to announce the cancellation, but like everyone else, has not given a definite answer for the cancellation. The rapper said the following on the social media site, “Regrettably the Promoter is cancelling the Australian Tour, refunds will be available at point of purchase. We hope to return to Australia in the not too distant future.”

Just last week, the label-mates released a joint song titled, “Timber” which currently has a music video in progress, at least according to Ke$ha’s Instagram pictures.

Instead of crying those glittery tears away, you can listen to “Timber” below.

We know that the Westboro Baptist Church are not ones to shy away from showing their distaste for certain musicians; pop stars and bands a like.

Whether it be All Time Low, One Direction or Taylor Swift, once you’re on their hit list, they never go away. Someone should have warned the Westboro tribe that one of those pop stars that they are against is not one to take thing lying down and that’s exactly what Ke$ha did to the horrid group.

The group has been protesting  Ke$ha’s Lincoln, Nebraska, show on Sunday night; assembling with their all too familiar signs condoning homosexuals and even playing their own parody version of Ke$ha’s hit song, “We R Who We R.”

What the disgusting protesters didn’t expect was for Ke$ha to be about two steps ahead of them and their overly predictable protest (well, when they do show up for a protest that is). The glitter-ific singer sent out three of her tank-topped male dancers to sync up their moves to the Westboro’s version of the song which they, of course titled, “God Hates Who You Are” (we aren’t even going to touch that one).

Check out the video below and some of the lyrics as well.

“Dear Lord, burn it up! / It’s about that time to finish up / We’re so sick of their filthiness / They makin’ it all lascivious / We’re just talkin’ truth / We’re tellin’ you bout the sins you do.”

If anyone were to win an award for best trolling ever, Ke$ha might just be coming out on top.