It hasn’t even been a week since Iggy Pop and Josh Homme announced a collaborative new album. Now, the act has unveiled plans to hit the road this spring. On Wednesday (Jan. 27), Pop, Homme and the rest of the artists involved in the joint record have unveiled a handful of tour dates that will find them visiting several North American and some European cities. Named the “Post Pop Depression Tour,” the trek will kick off on March 28 at the Paramount Theatre in Seattle. After two-and-a-half on the road, the tour will conclude on May 15 at Le Grand Rex in Paris.

The tour has been billed as a “very limited run of one-time-only live performances in specially selected venues.” The setlist for the tour will reportedly include new material from the joint effort’s upcoming debut record as well as a music from Pop’s own discography which spans 50 years. Pre-sale tickets for the shows will go on sale beginning Thursday, Jan. 28. For those who are not able to purchase pre-sale tickets, general ticket sales will begin on Saturday, Jan. 30. The complete list of upcoming dates can be seen below.

Last week, Pop and Homme unveiled the collaborative effort. Alongside the two musicians, Homme’s Queens of the Stone Age band mate, Dean Fertita, and the Arctic Monkey’s Matt Helders were also confirmed as group members. The supergroup’s debut record, Post Pop Depression is scheduled to be released on March 18. Listen to their lead single, “Break into Your Heart” here. 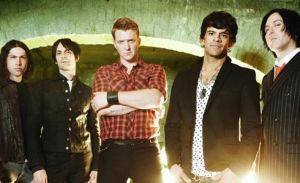 Note to anybody who thinks that it will be a funny and cool thing to storm on stage during a Queens of the Stone Age show; don’t do it.

Someone found that out the hard way the other day when they thought it would cool to storm the stage and frontman Josh Homme was not too please with that. During their show in St. Petersburg, FL a guy crashed the stage and Homme quickly forced the guy back into the crowd.

Video of the slight altercation was taken (and can be seen below) and gave us some gems straight out of Homme’s mouth:  “Don’t do that, because I’ll fucking … I don’t care if you love me. You can stand right there, dude. I don’t know what you’re trying to do. You’re lucky I didn’t fuck you up, bro. I’m here to play for you, not jerk you off, you fucking douchebag” and much more for like two minutes.

The “begins” around the one minute and sixteen second mark.

Did you know that Queens of the Stone Age frontman, Josh Homme had auditioned for Star Wars: Episode VII?

Well, don’t feel like an idiot because the singer did not actually audition for the J.J. Abrams directed film which is still in limbo. The musician was actually making a cameo on British YouTube comedy duo, Stinky Mike’s who were they were doing a spoof on the auditioning process for the film titled, Star Wars: Episode VII–The Auditions.

In the clip, one of the two was in the process of finishing up an interview with the musician when Homme let it slip out that he wished to expand his resume into the film world and as only someone could plan, there was a casting call taking place next door.

While Homme looks like he could easily pass for a wookie with his ginger looks and height, turns out that the music man actually has aspirations of being something a little less tall and fuzzy. He is quotes as saying he wants to be “R2D2, king of the droids; an articulate, multilingual doer.”

You can check out the video below of Homme and the Stinky Mike getting their Star Wars Episode VII on.

Anthony Bourdain has had lots of rock stars on his show, but one in particular is coming back once again to join the foodie. Josh Homme is back once again with fellow bandmate, Mark Lanegan to record the theme song for Bourdain’s new and widely announced CNN show, Parts Unknown.

Bourdain said in a statement recently about the theme song, “When you hear the new title music for Anthony Bourdain: Parts Unknown your head will explode, leaving only a smoking stump. When we heard what (Homme and Lanegan) had come up with, there was weeping and jaw-droppage.”

The first episode of Parts Unknown aired on CNN Sunday night, but can be seen here where, coincidentally, you can hear the song in all its glory, just remember to fast forward to the :50 mark.

Episode one takes place in Myanmar and the description reads, “a human-powered Ferris wheel, a punk rock group and the scariest train ride ever. If you missed Anthony Bourdain in Myanmar.”