Fashion Rocks will be returning this year and they will be bringing along with them one of fashion’s most read magazines as a sponsor, InStyle.

Fashion Rocks which celebrates the combination of fashion and of course music announced today the line-up for their event that will be taking place in September.

The acts already confirmed for the live, two-hour programs will include Miranda Lambert, Jennifer Lopez, Rita Ora, Usher, newcomers Nico & Vinz, Afrojack, and The Band Perry. Two major surprises on the list are two groups that personified the crazy fashion spectrums of the 80’s; KISS and Duran Duran.

The show will take place at the Barclays Center in Brooklyn on Tuesday, September 9 with Ryan Seacrest taking the position, of what else, host of the TV special.

“Fashion Rocks is the only show that celebrates the inextricable link between fashion and music, a relationship that is more relevant today than ever before,” executive producer Richard Beckman said in a statement.

“For the first time, we’ll air the event live during Fashion Week from Barclays Center. It will be a spectacular affair, featuring some of the world’s most talented musicians as well as today’s hottest fashions.”

Tickets for the event go up on sale beginning August 1, though Amex pre-sales begin on July 28. Tickets can be purchased on Ticketmaster through Barclays Center’s website or Ticketmaster’s site. 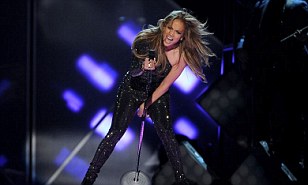 Jennifer Lopez was scheduled to perform at the 2014 FIFA World Cup, but now it has been revealed that Lopez will no longer perform at the tournament.

Lopez was set to join Pitbull and Brazilian singer, Claudia Lettie to sing their official World cup song, “We Are One (Ole Ola)” at the opening ceremony of the games.

Many were underwhelmed by the song, which reportedly took nine people to write, including Brazilians who are more offended by the fact that there is little to no Portuguese in the song though  Portuguese is one of the main languages in the country. Rather the song is predominately English and Spanish.

The song made its television debut last month during the annual Billboard Music Awards.

According to the Associated Press, the reason behind Lopez’s choice to forgo the tournament performance was because of unspecified “production issues.”

At present time, there is no actual reason as to why the pop star decided to not perform, just a few days short of the opening ceremony aside from the standard press release of  “regretfully Jennifer Lopez will not be attending this year’s World Cup opening ceremonies.”

But Pitbull and Lettie are not letting J.Lo’s bailing stop them from performing the song at the ceremony which will take place before Brazil takes on Croatia on Thursday (June 12) during the opening game in Sao Paulo.

If you missed a performance from tonight’s Billboard Music Award, you can see them all below including the opening performance by Pitbull, Jennifer Lopez and Brazilian singer, Claudia Lettie on their official FIFA song, “We Are One (Ole Ola),” Florida Georgia Line’s “This is How We Roll,” and the most anticipated, Michael Jackson’s tribute featuring a hologram-version of the King of Pop and dancer all dancing around him.

Pitbull, Jennifer Lopez and Claudia Lettie, “We Are One (Ole Ola)”:

Florida Georgia Line feat. Luke Bryan, “This is How We Roll”:

Michael Jackson, “Slave to the Rhythm”:

Miley Cyrus and The Flaming Lips, “Lucy in the Sky with Diamonds” (Beatles Cover):

The 2014 FIFA World Cup is set to kick off in Brazil later this year and now, after months of waiting the theme song for the tournament has been released. The song, “We Are One (Ole Ola),” is collaboration between Jennifer Lopez, Pitbull and The Voice Brasil coach/Brazilian singer Claudia Leitte.

In January, FIFA and Sony Music first announced “We Are One” which was written and co-produced by Pitbull, would be the theme song though no one had heard the song nor knew just what it would sound like. Now we have gotten the full song which will be performed live during the soccer tournament’s opening ceremony on June 12 in Sao Paulo.

Paying homage to the trio’s backgrounds, the song is multilingual featuring verses in Portuguese by Leitte.

Pitbull took to Twitter to announced the track’s release as well as to link fans of the song to the FIFA World Cup album it will be featured on, One Love, One Rhythm. We can also now anticipate that the music video for the song will be released any day now considering that the music video was being shot in Ft. Lauderdale in February.

While “We Are One” is the official song for the games, Santana and Wyclef Jean’s soon-to-be-revealed “Dar um Jeito (We Will Find a Way) will be the official anthem.

The American Music Awards are scheduled to happen in less than two weeks, and now they have added a number of new artists to the already announced line up for performers. Previously, they had confirmed that Justin Timberlake, Miley Cyrus, Lady Gaga, Macklemore & Ryan Lewis, Florida Georgia Line, Imagine Dragons, One Direction, Luke Bryan and Kendrick Lamar would be performing at the show and now we can add-on Jennifer Lopez, Katy Perry and TLC.

Jennifer Lopez will take the stage to perform a tribute to late Cuban singer and music legend, Celia Cruz while Katy Perry will open the live show with her current single from her new album, “Unconditionally.” As for TLC, they are riding on the coattails of the recently release autobiography about their life and career. Tionne “T-Boz” Watkins and Rozonda “Chilli” Thomas will take the stage with a special guest; we’re feeling it might be Keke Palmer of Lil’ Mama who were in the autobiography.

The AMAs are one of the first award shows of the season and one of the only ones that allows the fans to choose who will go home as winners. Nominees for this year’s event include Macklemore and Ryan Lewis who are leading the path with six nominations for “Thrift Shop,” Justin Timberlake and Taylor Swift are tied with five nominations while Rihanna, Robin Thicke and Florida Georgia Line lag behind with four.

This year also marks the first year that fans could vote on Twitter.

The event will be hosted by Pitbull and will take place at the Nokia Theater in L.A. on Sunday, November 24, starting at 8 P.M. EST; the show will air live on ABC.

“Don’t be fooled by the awards that she’s got, she’s still T. Swift from the block”

Just in case that wasn’t enough of a hint of who Taylor Swift had as her special guest at her final tour stop at Los Angeles’ Staples Center then we don’t know what is.

Just yesterday, we got video of Swift performed with Ellie Goulding her 2012 hit song, “Anything Could Happen” and today we received another video of the pop star bringing another pop star on stage to sing her hit song; Jennifer Lopez.

Swift starts off the introduction by reminiscing about when she was a little girl.

The audience which included about 15,000 Swift fans heard the opening notes of Lopez’s 2002 song from her third album, This is Me…Then.

Watch the video of the two pop star sing the song and strut around the stage surrounded by Lopez’s dancers.

This might be the reason why Adele referred to Jennifer Lopez as her good luck charm. While J.Lo and co-presenter, Pitbull presented Adele with her award for “Best Solo Pop Performance,” a crazy fan by the name of Vitalii Seduik, somehow managed to sneak through all the security to the stage and crash her winning moment. In the video, he can clearly be heard saying, “It’s such an honor to receive this award” and “I love you Adele!”.

You can check out J.Lo giving Seduik the boot with a slight motion of her thumb and then look towards the back of the stage making sure that he made his grand exit out.

For those of you who might not be familiar with Seduki, he was the Ukrainian reporter that tried to make out with Will Smith during his Men in Black III promotions tour. He was also the one who sent Madonna hydrangeas which, by the way the entertainer despises.