Weeks after Alderman Roberto Maldonado opposed the return of Riot Fest Chicago to their home of a few years, Humboldt Park, the multi-day festival has formally announced that it has moved to a new location this year.

But don’t think festival organizers who are one heck of a vocal bunch are holding back over their distaste of the situation.

Instead of letting the Alderman have the final say, Michael Petryshyn and Sean McKeough decided it would be better to move the festival to another location instead of being used as a “pawn.”

“Recently, as evidenced in the media, there were those who attempted to divide the Humboldt Park community with unfair and unjust tactics that in no way represent the overwhelming majority of the 26th Ward residents and businesses. And while Riot Fest supporters stressed that without question, Riot Fest has done nothing short of showing their unparalleled devotion to the city and the neighborhood they called home, Riot Fest partners, Michael Petryshyn and Sean McKeough made the ethical decision not to allow the festival to be used as a pawn and removed Riot Fest from the conversation regarding the ever-changing face of Humboldt Park.”

In their statement, they even revealed that they thought about moving the festival out Chicago all together. Quite a blow to the city when you realize over 160,000 people attended the 2014 edition of the festival.

After surveying all the options, the partners decided to move Riot Fest ten minutes from Humboldt Park to Douglas Park.

“After looking into a nearly dozen options on the table, which included leaving the city limits altogether, Mike and Sean chose Douglas Park as Riot Fest’s new home because of the beauty of the park, it’s proximity to public transportation, the accessibility for fans, the diversity of the neighborhood and the overwhelming feeling that they were welcomed and wanted.”

Apparently, the welcoming feeling was mutual.

“From Woodstock to Riot Fest it’s about unity and creating a positive community,” said Ald. Cardenas.

“It’s as American pie as you can get.  We are excited that Riot Fest has honored us by selecting Douglas Park as its new home.  More importantly, the community is thrilled to say ‘welcome’ to the over 150,000 fans, artists and staff that make Riot Fest possible.  We look forward to working with Riot Fest, Mike and Sean, and we welcome the economic impact Riot Fest brings to the community.”

But the new location isn’t the only piece of information Petryshyn and McKeough have given fans of the festival. Turns out, the line-ups for all three Riot Fests (Chicago, Denver, and Toronto) will be revealed next week.

No official date have been given for the reveals, so we’re just going to suggest that you keep an eye on their Twitter account all next week.

Riot Fest Chicago will take place during the weekend of Sept. 11-13. 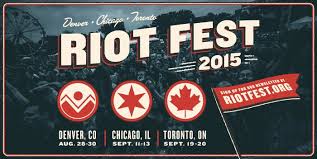 Drama is a-brewin’ in Riot Fest’s hometown of Chicago.

Earlier this week, and alderman spoke to the Chicago Tribune and told the publication that he opposed the return of Riot Fest to Humboldt Park due to “the mess they left at the park last year.”

“I am exceptionally disappointed at the Riot Fest organizers for the mess they left at the park last year and their shallow and hollow promises to restore the park,” Ald. Roberto Maldonado said.

“I don’t support them coming back.”

He followed that up by claiming that three-day festival had cut off public access to baseball diamonds and the Humboldt Park field house both before and after the event.

But for anyone who is familiar with Riot Fest and their Twitter account, it should not come as a surprise that founder Michael Petryshyn has come to defense of his festival by releasing a statement of his own about Maldonado’s opposition considering the alderman was supportive of the festival in the past.

“Due to the economic benefits Riot Fest brings to many 26th Ward businesses, the hundreds of thousands of dollars Riot Fest has donated to ward charities, our support in his reelection, and more importantly, job creation in a ward that has sorely lacked new job development, the Alderman and Riot Fest have been on the same page in shining a positive light on our culturally rich and magnetic neighborhood,” Petryshyn said.

Petryshyn also points out that some of the blame for the damage to the park rests on Maldonado’s shoulders since it was he who decided to add the low-lying parts of the park to the festival’s footprints.

“We must all be reminded that it was Ald. Maldonado’s direction and his final decision to change the footprint in 2014 to encompass low-lying parts of the park that we neither wanted, planned or needed during a July, 2014 meeting” Petryshyn added.

Following a torrential downpour that occurred on opening night last year, Humboldt Park became a mushy mess resulting in a lot of damage. At the end, the damage was originally estimated to be about $182,000, though recent reports claim it came in at $150,000; about triple what the festival paid in 2013.

The repairs that needed to be done to the ground included: grading, reseeding, adding topsoil, and soil aeration.

But unlike Maldonado and his opposition, Chicago Park District spokesperson Jessica Maxey-Faulkner said that the follow-up repairs to Humboldt Park are no different from what happens every year after Lollapalooza in Grant Park. To no one’s surprise, no one is trying to kick Lollapalooza out of their home.

Even thought the Park District has reportedly not issued a permit for this year’s Riot Fest, the festival’s official website has Humboldt Park.

Pre-sale tickets for the Chicago edition of the festival, which is scheduled to take place during the weekend of Sept. 11-13, are currently available.