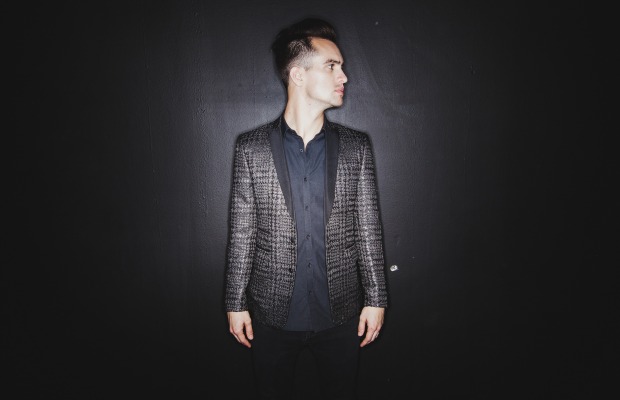 It’s been several months since Panic! at the Disco debuted their new song, “Hallelujah,” but now the group is back with the official music video for said track.

The video, which pays homage to the video game, Monument Valley, finds frontman Brendon Urie playing two different characters in the story; the priest and the sinner.

When asked about the concept behind the music video by Mashable, who exclusively premiered the video, Urie explained, “when I’m sitting in my confessional, basically, I’m playing two different characters.”

“I’m playing the sinner, and I’m playing the priest. As the priest, I’m trying to convince myself that it’s all okay, that I’ll absolve you of your sins and try to comfort you, and the sinner just isn’t having it. In the sinner’s mind, there’s this puzzle going on — I’m chasing this girl through this story that I’ve woven for myself and I can’t seem to break the puzzle. I’m trying to defeat it in order to have some kind of catharsis.”

Watch the trippy video below.

“Hallelujah” marks the first song to be released without longtime drummer, and P!ATD founding member, Spencer Smith. Back in April, the drummer announced that he would not return to the band following his stint in rehab, leaving Urie as the sole original member of the Las Vegas group.

Instead of stewing on the departure, Urie went back into the studio to start working on some new music.

“Right after we had the talk about what [Smith] wanted to do, and after he had released his statement to the fans, I was like, ‘Okay, I’m jumping back in. I still want to make this [upcoming] album as soon as possible.’ And he was 100% behind that. But he didn’t have anything to do with this album coming out, so it really is a departure,” Urie explained to the publication.

“Hallelujah” was released several weeks after Smith’s letter to fans, but before that, Urie had revealed plans to have a new album out by the end of 2015. Now, he has confirmed that the band is aiming to have the new record out by late-October.

The new record, which still does not have a name because it’s still being worked on, will be the follow-up to 2013’s Too Weird to Live, Too Rare to Die!.

It’s been a couple of days since Panic! at the Disco released their first new song in two years, “Hallelujah” and now footage of the band performing the song live has surfaced online.

Before the song’s release earlier this week, the Las Vegas band announced they would be performing at the 7th Annual Shorty Awards, which took place last night, and that’s where “Hallelujah” made its official debut.

Watch the video below which features an introduction from Wyclef Jean who apparently had to improvise his entire intro because the teleprompter wasn’t working.

Also, try not to get too upset when you don’t hear anyone singing along with Panic!. It’s kind of weird seeing/hearing live footage of the band performing and not hearing some random person screaming at the top of their lungs the lyrics off-key in the background.

Recently, frontman Brendon Urie sat down for an interview with Alt 98.7 where he revealed that the band’s upcoming fifth studio album is “85% completed” and will have a different sound.

“It’s this mix between Sinatra and Queen, if that makes any sense…Every time we do a new album, for me, it’s always evolving and changing—in the best way. There’s going to be a new energy live.”

And we’re looking forward to that.

Last week, Panic! at the Disco frontman Brendon Urie revealed in an interview with Billboard that he had been working on new music and when asked about when it would be released, he teased, “this year.”

Well, he kept his promise and today, a brand new track titled “Hallelujah” was released with a letter directly from the singer, thanking fans for all their support during all the troublesome times that he, and the band, have encountered.

Read Urie’s letter below and listen to the new song below which give us some serious Fall Out Boy vibes.

First off, thank you. Thank you for always being there. For speaking your mind. For following what you believe. For allowing me to grow. For granting me the opportunity to live my dream. Words simply can’t express my full appreciation and gratitude for you.

As I begin what feels like a new chapter of my life, I’m filled with immense excitement and a fresh sense of hope. I’ve seen this band through every phase, every change, every hardship. And yet my appreciation and love grows with every breath.

So I lift my arms in praise of your greatness. YOU are great. YOU are beautiful. YOU are talented, and smart, and kind, and loving, and generous, and simply amazing.

And you make me want to scream “HALLELUJAH!” from the top of my lungs with every bit of fervor and strength I possess. And I invite you to join me as you have over and over again.

No word on whether this will be a lead single for a new album, but the track is currently available on iTunes for purchase.