Gogol Bordello have returned with the music video for their latest single, “Seekers & Finders.” On Tuesday (June 26), the self-proclaimed gypsy rockers released the clip for the new song featuring close friend Regina Spektor. The over-three-minute clip primarily features footage of the band performing, while also incorporating solo black-and-white footage of Spektor and vocalist Eugene Hütz singing the song to each other. The video also features images related to Alchemy, Hermeticism, and esoteric knowledge which leaves its interpretation up to the viewer.

The video’s live footage was recorded during the band’s performance at the Fonda Theater in Los Angeles back in March.

In a press statement, Hütz describes the duet as: “The duet of the wandering Jew and the roaming gypsy by the campfire, which we represent most perfectly.”

While asking Spektor to provide her vocals to the new song may have been a no-brainer —the have been friends for years— Hütz reveals the one special encounter sparked this connection.

“Now, it seems this precious collaboration with our dear friend Regina was in the making all along the years of friendship and mutual support. But it actually materialized rapidly once Regina told me that her ancestry also runs back to Ukraine. Writing with Regina’s voice in mind was easy and joyous, despite the heavy topics we pondered.”

Check out the complete music video for “Seekers & Finders” above and try not to get a little jealous that you weren’t invited to the show.

In addition to the release of the new music video, Gogol Bordello also announced that their first releases will be available digitally and on CD beginning next month. The group’s reissues will include the band’s 1999 debut, Voi-La Intruder; their sophomore record, Multi Kontra Culti vs. Irony; and East Infection, an EP of songs leftover from the original Rubic Records sessions.

A short run of 1000 CDs of each album will be available on limited edition digipak. All the reissues are due July 6. For pre-orders, head on over to the band’s website.

It’s official, music festival season is upon us.

After last night’s rapid-fire release from Riot Fest, we thought we would be able to recuperate before another festival would give us their line-up, but Fun Fun Fun Fest had other plans.

Earlier today, the Austin-based music festival released the complete list of artists who will be heading to Texas at the beginning of November for the weekend-long festivities which will also mark its tenth anniversary (or birthday).

The line-up includes acts like: D’Angelo, CHVRCHES, ScHoolboy Q, NOFX, American Football, Conor Oberst’s Desaparecidos, and a couple of artists who appear to be heading out on the music festival circuit this year, Wu Tang Clan, Coheed and Cambria, and Dwarves.

Check out the poster below for the complete list of bands/performers. 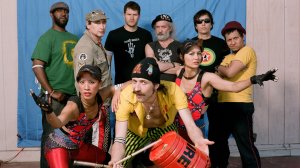 Gogol Bordello must have been happy now that the sixth album, Pura Vida Conspiracy has been unleashed, but it looks like a former band member is trying to make that happiness short-term, at least for the group’s frontman. Former guitarist, Oren Kaplan, has filed a claim that frontman (and occasional actor) Eugene Hütz for $950,000 over an alleged financial scheme.

In the filing, Kaplan reported that “Hütz brazenly absconded with approximately half a million dollars from the bank accounts of the Gogol Bordello entities and deposited those funds into the accounts of new companies which are wholly owned by Hütz.” The Guardian went on to report that the two members shared the accounting duties until 2009, when the frontman took over. After taking over the duties, Hütz reportedly doubled his paycheck earning him $130,000 a year while Kaplan was only getting paid $57,000; at least that’s what the guitarist says.

Kaplan went on to say that Hütz told him to take a hiatus from the band to grieve over the loss of his mother, but that there was an actual ulterior motive to the suggestion; he wanted him gone so he didn’t have to share in profits from a song that was used in a Coca-Cola commercial.

“Hütz accomplished this ruse by feigning concern for plaintiff … and encouraging plaintiff to take an extended leave of absence from the group, during the very time when the group would be recording its song for the Coca-Cola commercial.”

As a result of all the bad blood between the two of them, Kaplan is asking for $950,000 in damages (yes, you read that right, almost a million dollars). Kaplan claims that he improved the band’s musicianship and finances and because of that he should be compensated as such. He goes on to explain that he believes that Hütz somehow managed to trick the other band members into thinking that they needed to kick Kaplan out. Aside from that, he’s asking for ANOTHER $950,000 to be paid to Gypsy Punks LLC.

So far none of the remaining members of the band have commented on the situation, and would you blame them with almost a million dollars on the line.