We all know the story of how the Foo Fighters had to cancel all their European tour dates due to a massive injury frontman Dave Grohl sustained during the group’s show in Sweden a few weeks ago.

One of those cancellations was their gig at the Glastonbury Festival in London.

Florence and the Machine quickly swooped in to volunteer to take over for the band during their now vacant headlining slot on Friday’s (June 26) line-up. We have our own theory that it’s because frontwoman Florence Welch knows what it’s like to have to cancel shows due to a serious injury; the singer busted her foot earlier this year at Coachella and was stuck sitting on a stool during her performance until recently.

Turns out, the band decided to pay tribute to their predecessor by performing their own version of “Times Like These.”

Welch began by telling the audience, “We’d like to dedicate this next song to the legend and all around incredible human being Dave Grohl. He was so incredibly kind and supportive to us when we were first starting out, and we were so sad to hear he broke his leg.”

Check out the video below

Florence and the Machine are currently in the middle of their Summer festival tour which has them playing several music festivals across the world. After that, they will pack their bags in the Fall and come to the United States for a U.S. tour in support of How Big, How Blue, How Beautiful.

As for the Foo Fighters, there has been no update on whether they will be canceling any of their U.S. tour dates which is slated to begin next Saturday, July 4.

Looks like Dave Grohl’s “little fall” during the Foo Fighters’ show in Sweden last Friday is going to have a major effect on the band’s touring schedule.

In a post on the Foo Fighters website, Grohl wrote a letter to fans catching them up on what has happened since the infamous and widely seen fall as well as some behind the scenes tid-bits that the audience was not privy to.

As it turns out, the fall ended up being more serious than anyone could have anticipated. Thanks to the fall, Grohl dislocated his ankle and ended up snapping a fibula “like an old pair of take out chopsticks.” The injury was so severe, Grohl was flown to London to have surgery on Monday (June 17).

After the surgery, Grohl was advised by doctors that he would need to lay off of touring for a while meaning that as of right now, all European tour dates have been cancelled including their Friday night headlining spot at Glastonbury.

“My doctors have advised me to lay low for a while. The most important thing now is for me to recover from the surgery, to keep my leg elevated so as to keep swelling down and prevent any infection/complication that could do long-term damage. I’m not out of the woods yet, folk,” Grohl writes in the lengthy post that can completely be read here.

While all the European tour dates have been cancelled, there has yet to be any indication on whether the band’s upcoming United States tour dates will also be affected by the recovery process. The Foo Fighters were/are scheduled to begin touring the United States this summer on the Fourth of July at Washington, D.C.’s RFK Stadium with the tour wrapping up on Oct. 7 at the FedExForum in Memphis.

Long live the selfie sticks at music festivals, we guess.

After several North American music festivals decided to ban the distracting device, English festival Glastonbury has revealed that they will be letting the contraption into their event.

In an interview with NME, festival organizer Emily Eavis confirmed that they do not have a set rule about the elongated stick, unlike other festivals (and venues), who have it listed on their prohibited items category.

“A lot of festivals have banned selfie sticks, but we’re not really in the business of banning stuff. We haven’t really decided where we stand on them,” she said.

“I’m going to walk around and see if they’re getting in the way or not!”

The banning of the seflie sticks isn’t just contained to North American venues. Surprisingly, the banning began across the pond at several European locations. Music venues like O2 Academy Brixton, London’s O2 Arena and the SSE Wembley Arena as well as historical landmarks like France’s Palace of Versailles and Rome’s Colosseum have banned the elongated sticks from their premises.

They have cited safety and health concerns as the reason, but we can probably assume that the real issue is.

If you’re thinking about taking the selfie stick to any music festivals this Summer, tread carefully because you never know who you might be blocking just to take a gazillion pictures to show off you were at a festival. The person you’re blocking might just be planning your demise using said stick.

Glastonbury Festival will take place from June 24-28 at Worthy Farm, Somerset. This year’s headliners include Kanye West, the Foo Fighters, and The Who. 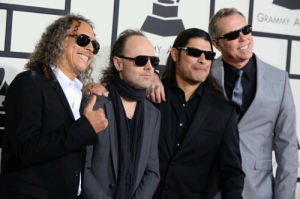 Remember how a few weeks ago, there was a petition started by attendees at the annual Glastonbury Festival who were trying to get Metallica kicked off of the festival line-up? Well, like it was assumed, the petition went nowhere which led to drummer Lars Ulrich laughing in all their faces and telling them to “bring it on” during an interview.

Fast forward to this weekend, which is the weekend which Glastonbury is taking place (and probably as you are reading this there are bands on the stage performing) and it looks like the guys in Metallica decided to take all the bad publicity that their headlining reveal had garnered and turned it into a profitable opportunity.

According to Gigwise, the band have taken all the negative quotes about the festival organizers’ decision to have the metal icons headline and put them on a t-shirt which is currently on sale at the festival.

Quotes such as, “Metallica at Glastonbury, whoopee-fucking-doo” from The Guardian, “I’m not sure it adds up…could you have Metallica in this hippy nucleus” by The Arctic Monkey’s Alex Turner, “Metallica aren’t in the spirit of peace-loving Glastonbury” by Lisa B., and a couple of more quotes.

Metallica are set to hit the stage tonight at Glastonbury and we can pretty much assume that the place will have a lot of people in the audience. Sorry, hippie, “peace-loving” people, you lost this round and showed your real colors which apparently aren’t all that peace and loving, after all.

Metallica might be icons and legends in the music world, but it seems that no one wants them at this year’s Glastonbury Festival. The annual festival which takes place in the UK, revealed that the rock band would be the third and final headliner for this year’s show, but it’s becoming more evident that none of the attendees or artists associated with the festival, want them to be there.

The Arctic Monkeys, who headlined the show last year and Mogwai, who will be performing at this year’s show, have said not-so-nice things about the icons.

Arctic Monkeys’ frontman Alex Turner, told Time Out London “I’m not sure it adds up,” he began. “I know we’d buzz off it, but fundamentally could you have Metallica in the hippy nucleus?”

While Mogwai referred to the legendary metal band as “shite” even insulting the band’s drummer, Lars Ulrich by saying that his drumming is “unbelievably bad.”

But that’s not even where it ends. A group of Glastonbury attendees have now created a Facebook page encouraging the festival to remove Metallica from the line-up.
This petition all began as a response to frontman James Hetfield’s involvement in an upcoming film about bear hunting. At this present moment, the page had gathered 15,000 members. The page’s mission, as written by them states, “Metallica’s lead singer James Hetfield is a big game hunter and promoter. This is incompatible with Glastonbury Festivals ideals.”

Meanwhile, it doesn’t look like those petitioners will be getting their way anytime soon. The festival organizers have continued to defend their decisions. “There’s a huge swathe of people who love Metallica to bits and just think they’re absolutely amazing,” Glastonbury founder, Michael Eavis said in an interview. “They’re worthy headliners.”

Can’t we all get along? Isn’t that part of the hippie ideals? 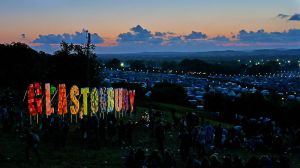 The U.K.’s famed Glastonbury Festival is set to take place this upcoming weekend with acts such as Elvis Castillo, Rufus Wainwright, Vampire Weekend and many more.

Today, the list of set times have made their way on the internet and the biggest surprise is the fact that the band that has garnered the most attention, The Rolling Stones, would be performing a two-hour plus set while other acts such as Mumford & Sons and the Arctic Monkeys would perform for an hour and a half.

The Rolling Stones’ set time has been revealed to start at 9:30 p.m. and go on until 11:45 on Saturday. To check out the full set time for all the performers that will be at the three-day-long festival, you can click here and head on over to Glastonbury Festival’s website.

Not only is this the first time that The Rolling Stone will be hitting the Pyramid Stage (the main stage for those of you who aren’t familiar), this is also the first time that the festival will be live-streaming the entire event. Viewers from around the world will be able to see performers from all of the stage through some new technology which allows fans to choose from simultaneous live streams. In total, the BBC is reporting that they will have over 250 hours of concert footage.