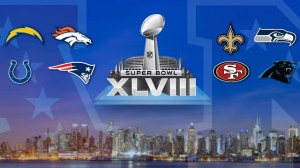 While football fans are getting excited for the Super Bowl, fans of music might have something to look forward to that weekend as well; a whole lot of music.

VH1 is taking charge and hosting not one or two concerts in preparation for football’s biggest night, instead the network has revealed that they will be holding a series of six concerts in New York City’s five boroughs and one in New Jersey beginning on Monday, January 27. The concert series has been named VH1’s Super Bowl Blitz.

“Normally we would do one big show in the market where Super Bowl is being played, as we have with All American Rejects to Maroon to B.o.B. to Rihanna – twice,” VH1 president Tom Calderone said about the network’s decision.

“But we wanted to celebrate the fact that it’s not only in New York and New Jersey for the first time, and it’s an opportunity to do an outdoors, against-the-elements kind of show.”

The concerts will air live each night on VH1 at 11 p.m. ET/PT and stream live via the VH1 mobile app and at SuperBowl.VH1.com.

For those wanting to go to the shows or live in that area, tickets will be made available starting Monday, January 13, but you will have to keep your Twitter account locked down to VH1’s official Twitter (@VH1) for more information.