So what happens when you combine a folk band, one-third of a pop-punk band, and an 80s staple? One collaboration that, in a way, works.

During their show last night (Aug. 18) at the Forum in Inglewood, CA, Mumford and Sons brought Blink-182’s Mark Hoppus on stage to join them for a cover of the Eurythmics’ “Sweet Dreams.” But Hoppus wasn’t the only one putting his hat in the ring for this version of the song; Mumford’s tour mates Jack Garratt and the Vaccines joined in on the performance as well.

Watch some videos from the show below.

As it turns out, it isn’t the first time the United Kingdom band covered the 1983 song. They debuted their version of the song back in late July while performing at BBC’s Maida Vale Session, but recently, they added to their touring setlist.

Mumford and Sons is just about to wrap up their summer festival tour which they embarked on in support of their recently released album, Wilder Mind. Their next stop will be at the Gentlemen of the Road festival in Salida, CO this upcoming weekend (Aug. 31-22). 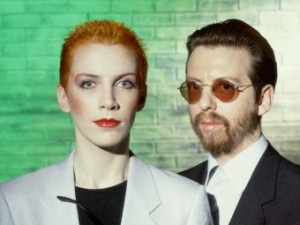 Sweet dreams are definitely made for fans of the Eurythmics because it has been confirmed that the 80s duo will once again reunite in honor of the Beatles.

The Recording Academy announced today that Annie Lennox and Dave Stewart will ‘come together’ as part of The Night That Changed America: A Grammy Salute to the Beatles.

Longtime Grammy producer Ken Ehrlich, who also happens to be the one producing the special thought that the duo would be the perfect candidates to join in on the special event paying tribute to iconic and influential rock band.

“When it came around to booking this show, what I felt was important was to try and find those artists who not only would be able to interpret Beatles songs, but would also have an … understanding of what they meant,” he revealed in a recent interview.

During the interview, Ehrlich didn’t reveal which Beatles song the Eurythmics would be performing during the special, but he did reveal which songs other performers taking part in the special will perform. John Mayer and Keith Urban will pair up to perform “Don’t Let Me Down,” while Alicia Keys and John Legend will perform a duet version of “Let It Be.” Maroon 5, alongside a dozen other artists are scheduled to perform on the special.

The special will be taped at the Los Angeles Convention Center on January 27, a day after the Grammy Awards while the special will air on CBS, February 9, exactly 50 years after the Beatles made their U.S. debut on The Ed Sullivan Show.

So which song do you guys think or hope the Eurythmics will perform during the special?