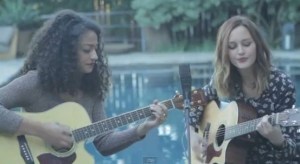 Who knew that Blair Waldorf could sing?

Well, considering Leighton Meester did all the singing in her role in the Gywneth Paltrow starring Country Strong, it doesn’t come off as a surprise. Aside from doing all her singing for the film and its soundtrack, Meester also contributed vocals to Cobra Starship’s “Good Girls Go Bad,” but covering a Fleetwood Mac song and having a soulful tone to it is not easy.

Meester who recently made news for marrying boyfriend and fellow actor Adam Brody in super secret, will be taking her signing skills to Broadway for a production of “Of Mice and Men” with James Franco and Chris O’Dowd.

So what do we think about their cover?