The news? That they would be re-releasing the full album, but with a few extra bonus tracks as well as some acoustic version of songs that were already there.

The first new song off the album was “A Love Like War” which featured Pierce the Veil’s frontman, Vic Fuentes. Today, the band have officially “leaked” their own album five days before the scheduled released date which is September 30.

For those wanting to hear the new and acoustic tracks that have been added to the tracklist, check it out below and tell us what you think of the new additions to the album.

Well, today we got the official word that the album will be re-released and be called, Don’t Panic: It’s Longer Now. The new album will also include a new song which will feature Pierce the Veil’s Vic Fuentes, confirming all the talk about his presence in the new, cryptic trailer that was released on the band’s website on Friday.

The re-release will feature four new songs as well as a few acoustic versions of several of the older songs such as “Backseat Serenade,” “For Baltimore” and “The Reckless and the Brave.”

For now, you can check out the previous released list of tracks from the reissue below as well as the music video for “A Love Like War.”

Don’t Panic: It’s Longer Now will be released via Hopeless Records on September 30.

What in the world is going on with All Time Low’s website?

Well, that’s probably the thoughts going through the head of many of their fans and casual listeners when each band member wrote a simple Tweet which consisted of the band’s website, alltimelow.com.

Once the link was clicked it would lead you to the site where the first new bit of information since July 30 would be on the top; spoilers, it’s a short black-and-white video which features the band as well as Pierce the Veil’s Vic Fuentes in a theater. Now what this cryptic message from the usually outrageous foursome means, is not entirely known yet.

Just yesterday, Absolute Punk had revealed that the band would be re-releasing their fifth studio album with several new tracks one which would be featuring Fuentes. The reissue has been named, Don’t Panic: It’s Longer, which funny enough would be fitting considering the band’s love of brainless, frat boy-like jokes. Don’t Panic: It’s Longer is set to be released on October 1, at least according to  Amazon UK and CDON. 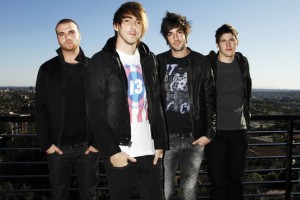 All Time Low are back with a brand new video for their newest single, “Backseat Serenade.”

A few weeks back, bassist Jack Barakat released a few tweets letting fans know that the bands new video would definitely be “Backseat Serenade” even though the band were being cryptic and hiding the identity of the song.

Check out the full video below:

“Backseat Serenade” is featured on the band’s fifth album, Don’t Panic that was released through Hopeless Records last year.

A few days back, the boys from All Time Low had said that they would be filming the music video to a new single, they just weren’t giving out the name of the song quite yet. Today, it was confirmed by guitarist, Jack Barakat that the song of choice would be “Backseat Serenade,” a personal favorite from their current album, Don’t Panic.

Check out Barakat’s tweet about the music video here: 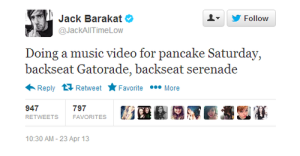 So far, there has been no release date for the video’s premiere  but then again, they are probably still in the middle of filming it.