Remember how a few weeks ago, there was a petition started by attendees at the annual Glastonbury Festival who were trying to get Metallica kicked off of the festival line-up? Well, like it was assumed, the petition went nowhere which led to drummer Lars Ulrich laughing in all their faces and telling them to “bring it on” during an interview.

Fast forward to this weekend, which is the weekend which Glastonbury is taking place (and probably as you are reading this there are bands on the stage performing) and it looks like the guys in Metallica decided to take all the bad publicity that their headlining reveal had garnered and turned it into a profitable opportunity.

According to Gigwise, the band have taken all the negative quotes about the festival organizers’ decision to have the metal icons headline and put them on a t-shirt which is currently on sale at the festival.

Quotes such as, “Metallica at Glastonbury, whoopee-fucking-doo” from The Guardian, “I’m not sure it adds up…could you have Metallica in this hippy nucleus” by The Arctic Monkey’s Alex Turner, “Metallica aren’t in the spirit of peace-loving Glastonbury” by Lisa B., and a couple of more quotes. 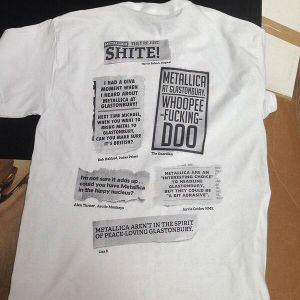 Metallica are set to hit the stage tonight at Glastonbury and we can pretty much assume that the place will have a lot of people in the audience. Sorry, hippie, “peace-loving” people, you lost this round and showed your real colors which apparently aren’t all that peace and loving, after all.